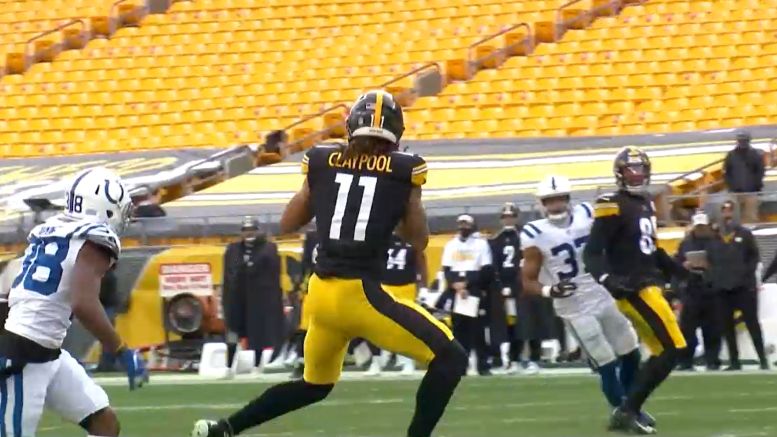 Reasoning: While his own natural maturation from year one to year two should obviously see his stock rise, I would argue that the return of JuJu Smith-Schuster for at least one more season will continue to allow Chase Claypool to be less of the center of attention as he develops.

Seeing as how we are now here, on the first day of the 2021 NFL Draft, it might make sense to wrap our pre-draft stock count with the Steelers’ highest most recent draft pick, wide receiver Chase Claypool, who was taken in the second round a year ago.

While he didn’t make the Pro Bowl, nor win Offensive Rookie of the Year, Claypool had arguably one of the better seasons of any rookie in the league in 2020. Many a re-draft exercise has him going in the top 15 picks, rather than at 49 on Day 2.

Part of the reason that Claypool was able to be as successful as he was last year was because other teams were still learning about him. They also had to pay mind to JuJu Smith-Schuster and Diontae Johnson, whom Ben Roethlisberger had quickly come to favor.

While I believe that Claypool will develop into the Steelers’ number one receiver (perhaps not in terms of targets but in impact, and perhaps playing time), he can still start out as a dangerous complementary player to Smith-Schuster and Johnson, two other weapons that defenses cannot fail to account for.

If he really continues to grow into his talent, then it’s certainly only a matter of time before ‘Mapletron’ starts more consistently drawing double teams and things of that nature. I think the Steelers’ current setup allows that oppositional recognition to happen on a manageable curve, rather than thrust against him all at once, which will allow for a smoother ascension into that top role.

At least that’s how I see it, but perhaps I’m talking out of my ass.