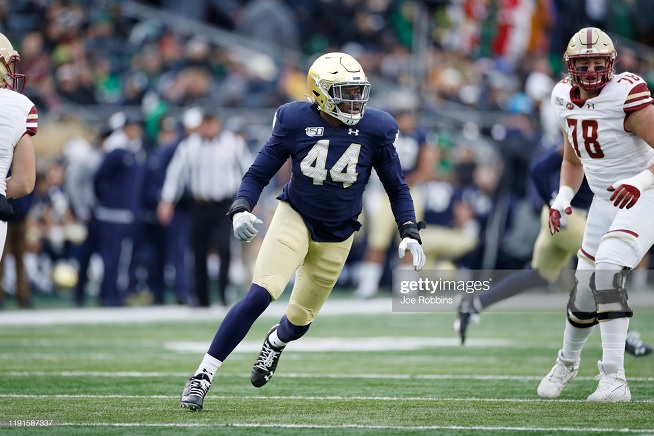 Reasoning: The Steelers continue to add to their 90-man roster with cheap signings. Former Houston Texans edge defender Jamir Jones is among the latest, and will compete at a rather thin outside linebacker position.

Like so many other players, Jamir Jones is a good athlete with a backstory of interest. The majority of people whom this describes ultimately don’t ‘make it.’ But the first step to doing so is getting your foot in the door. And the young man now has his latest landing spot in Pittsburgh.

The younger brother of Steelers’ offensive tackle Jarron Jones, both played at Notre Dame along the defensive line. Jarron would later be moved to the offensive side of the ball after graduating. Jamir was moved from linebacker to the defensive line in his final season in 2019, during which he registered 4.5 sacks and 6.5 tackles for loss.

Coming out of college last year, he initially went undrafted, and signed with the Texans; however, he did not make the 53-man roster. In fact, Houston waived Jones at the end of July, and did not spend any time with any organization during the season.

He did recently work out at Notre Dame’s Pro Day, the same as many other ‘veteran’ unsigned players granted the opportunity to return to their alma mater in the hopes of getting some eyes on them and earning a contract.

The good news for Jones is that he comes to a team that is thin at his position, as he profiles to play on the edge for the Steelers at 6’4”, 255 pounds, at least according to his listing on the team’s website. Behind T.J. Watt and second-year Alex Highsmith, they only have the veteran Cassius Marsh, who is a recent addition to the team.