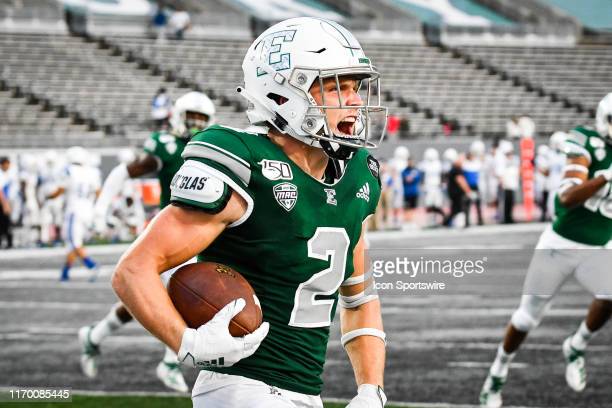 As we’ve done in previous years, we’re taking a look at those Pittsburgh Steelers under futures contracts for the 2021 offseason. The ones who spent most if not the entire year on the practice squad and what we can expect from them during training camp (hopefully) into the regular season.

Sexton may not technically have been signed to a “futures” deal but his minimum, offseason contract functions all the same. He’s been one of five players the Steelers have signed by the team following Pro Day workouts. Sexton, though, didn’t actually lose his workout last season like most players did.

Sexton and his Eastern Michigan workout occurred on March 12th, 2020, virtually the last day there were Pro Days before the football world shut down. The 12th was the final day we noted any Steelers’ scouts on the trail, though we don’t know if any attended the EMU workout. Sexton put up solid numbers. A 4.44 40, 34.5 inch vertical, 10’2″ broad, though his agility drills were lackluster. A 4.34 short shuttle and 7.14 three cone.

In school, Sexton put up consistent though unspectacular numbers. From his sophomore to senior seasons, he never had fewer than 26 receptions but never more than 37. His yards ranged from 357 to 508 while his touchdowns increased by one (two in 2017, three in 2018, four in 2019) each year. I guess if he stayed in college another decade, his end zone numbers would’ve been remarkable.

He was used as a bit of a gadget/motion piece in their offense. Elements that could work under new offensive coordinator Matt Canada. Like this jet pass touchdown against Central Michigan in 2019.

Sexton also has some return value. He was the team’s starting kick returner in 2017 though he averaged just 17.3 yards per return on 18 tries. But his biggest special teams play easily came in avoiding an upset against Central Connecticut State. Down by one with less than 20 seconds left, Sexton came flying off the edge to block the punt, scoop the ball, and score to win the game.

His special teams snaps waned as he became a more important figure in the offense. But as a sophomore in 2017, he racked up 14 tackles. Pretty incredible number. He finished his college career with 26 of them.

Sexton has an interesting skillset. Fast receiver with special teams value in multiple facets. That’s going to play well for someone trying to standout on a 90 man roster. The receiver room is crowded, making his path to the 53 tough, but he’s a big-play waiting to happen. A 70-yard score is the type of stuff that gets you noticed and more importantly, keeps you on a roster. Remember this guy’s name.