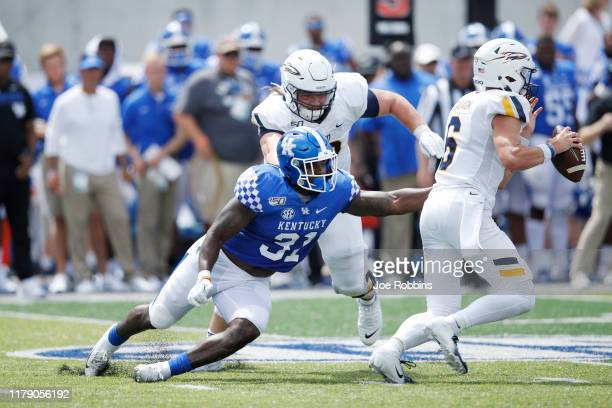 -Well-built frame to dip and run under larger tackles
-Has experiencing rushing from left or right, standing or hand in the dirt
-Motor runs hot, never gives up on a rep and has great want-to in pursuit
-Experience dropping, turning and running in coverage
-Shows the ability to drop shoulder and run the arc to the QB
-Active, consistent hands off the edge

-Lack of length causes issues trying to win against tackles
-Struggles to create separation and lock out for control
-Power overall is a component missing from his game
-Wins more on effort than skill throughout film
-Though capable in space, lacks overall athletic traits to play in space often in the NFL
-If he doesn’t win with initial speed, he can be wiped out

A key piece to the Kentucky Wildcats’ success over the last three years, yet seems to be flying under the NFL radar is EDGE rusher Jamar Watson.

Watson, who consistently was in the top 10 of sacks and tackles for loss in the SEC over the last three years, certainly brings the production and experience to the table in this draft class, but there’s much to be desired on tape with Watson from an athletic standpoint.

That said, it’s really hard to overlook what he’s done in his career rushing the passer.

Against Tennessee in 2020, Watson showed the ability to dip and run underneath larger tackles, allowing him to get to the quarterback often.

He’s a speed rusher through and through, and has the ability to maintain his speed while dropping his inside shoulder, making himself a small target for punches from tackles.

Again, look at the way Watson makes himself small and turns the corner for the sack.

His first step is strong to chew up yardage up the field, allowing him to get even with the tackle, which then causes him to drop his shoulders to slip under the block and reach the QB.

Watson has the new-age eurostep as a pass rusher to his game, which he showed here against Vanderbilt in 2020.

He rocks the Vanderbilt tackle to sleep with the eurostep before then dipping and ripping underneath on the outside, working his way into the sack. I like the way he uses his hands early in the rep here when engaged to stay clean and win.

Watson isn’t going to blow anyone away athletically, but I love Watson’s ability to read, react and chase down plays from the backside.

Against North Carolina State in 2020, the Wolf Pack left him unblocked on the backside, which ends up being a massive mistake.

Watson is decent in space and reads plays well in front of him.

During a monster night against South Carolina on Senior Night in 2020, Watson showed his ability to play in space some on this tunnel screen.

Watson recognizes it quickly, working upfield to slip under the block from the climbing lineman, punching the football out in the process. He has good overall movement skills on tape and finds himself around the football often.

This is a clunky rep overall from Watson, but it ends up being a terrific one in the end for he and the Wildcats.

You can see Watson at the top of the screen squeeze the route out to the sideline. He feels the receiver work vertically and flips his hips slowly to turn and run.

Though he’s in chase mode, he never gives up on the play, working himself back into the fold before ripping the ball away for the interception and the turnover.

While the tape looks pretty decent overall for his build and position, there are some concerns with Watson’s testing numbers. During his Pro Day at Kentucky, Watson clocked a 4.78 40, 30-inch vertical, 7.33 3-cone, and 19 reps on the bench.

The 3-cone time is a concern as it is in the 12th percentile and has me concerned with his ability to turn the corner against bigger and better tackles in the NFL.

All that said, I think Watson can stick on a roster as a decent No. 4 OLB in a 3-4 scheme and will play his butt off on special teams.