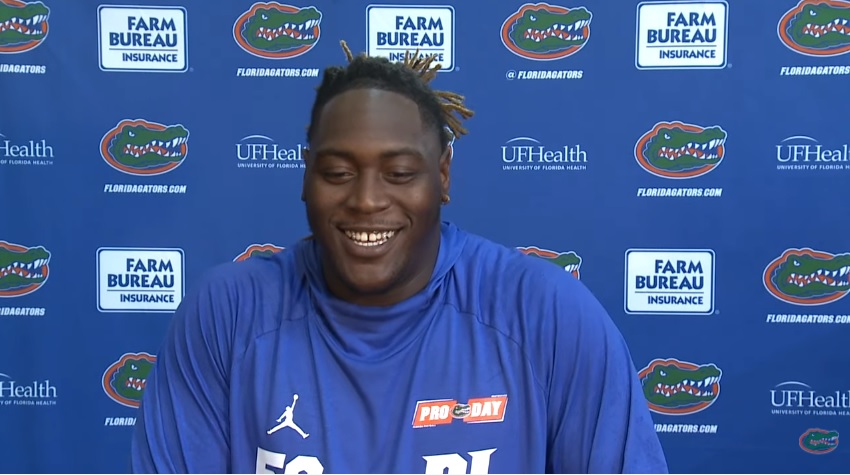 – Has had constant struggles maintaining a good playing weight, ballooning up over 360 lbs. at times
– Motor runs hot and cold and will fatigue quickly if needed to play late into the game or a lot of consecutive snaps
– Will stand up far too often, not playing with adequate bend to sit in and anchor against the run
– Gave a lot more ground against the run than you would like to see from a player of his stature
– Needs to fight off blocks better with more urgency to control his gap

– Senior Prospect from Fort Lauderdale, FL
– Attended powerhouse American Heritage HS under coach Patrick Surtain, playing on both the offensive and defensive line
– Played extensively on the basketball team as a multi-sport athlete
– Played in all 11 games for the Gators as a true freshman, recording 11 tackles and 1.5 for loss
– Started two of 10 appearances as a sophomore, posting 21 tackles and one TFL
– Played mostly as a reserve his junior season in 12 games, posting 29 tackles (12 solo), four for loss, with two sacks
– Started all 12 games in the middle as a senior, notching 37 tackles, 3.5 for loss and 1.5 sacks

Tedarrell “TJ” Slaton is a highly-touted recruit out of heralded American Heritage HS that churns out college football stars and NFL prospects nearly every year. Having been a mainstay on both sides of the line as well as a contributor on the hardwood as a prep athlete, Slaton possesses impressive athleticism given his size. During my time with the Gators, Slaton’s weight could balloon up to about 360 lbs. any given week.

Despite this, he is very explosive, showing great burst when on the line for a sprint as well of out of his stance. His 10-yd. split in the 40-yd. dash was better than several linebackers or skill position guys when watching him up close, and this trait shows up on film. Here against Kentucky, we see Slaton fire out of his stance, being one of the first players on offense or defense off the ball, blowing past the tackle tasked with down blocking him, and blowing up the runner in the backfield.

When he gets his large center of mass moving, he can be very difficult to contain from penetrating into the backfield. Here against the Commodores, Slaton splits the double team on the right side of the line, shooting through the gap and wrapping up the back in the backfield for the TFL.

Slaton is an extremely strong man, having benched over 400 lbs. routinely for reps and squatting over 600 lbs. for sets of eight reps as well. This strength and size make it very difficult for average interior blockers to handle Slaton one-on-one. Here against Texas A&M, we see Slaton walk the center back into the backfield, walking him right back into the tailback to knock him over and prevent getting back to the LOS.

For being over 330 lbs., Slaton does show promise as a pass rusher. He is a great penetrator, having the strength to walk back blockers on a bull rush, as well as show a pass rush plan by actively using his hands. Here we see Slaton get underneath the block, ripping through and working the angle into the passer in the pocket, finishing on top of him for the sack.

He uses his hands fairly well for a big man in the middle, being able to swim over blocks and get into gaps to plug the middle and get stops. We see that here vs. the Tigers, where Slaton gets the quick swim move over the guard that gets caught lunging forward, showing up right in the face of the runner, forcing him to bounce to the right where he pursues him and gets in on the tackle.

Here in the same game we see a similar move with a club/rip combo on the center, getting into the backfield and shutting down the QB on the designed run play for a TFL.

Slaton was able to use this swim/club move on some of the better blockers in the SEC, getting heat on the QB as he would let go of the ball. Here against Alabama, we see Slaton win on the inside against #69 Landon Dickerson, working the arm over/swim move to evade the block and get into the face of #10 Mac Jones. Jones is able to release the ball on-target, however, to #22 Najee Harris, who takes to the house. But Slaton does show that he can be more than a one-dimensional plugger up the middle, who can be disruptive in the passing game.

The problem is, Slaton doesn’t consistently fill that role as a plugger against the run as you would like to see of a player of his skillset. He has great traits to be dominant against the run, but he hasn’t put it all together. He likes to get high out of his stance, popping straight up and not playing with the leverage and anchor he needs to sit in against blockers in the run game looking to push him back.

Here against the Crimson Tide, we see Slaton get tall on the snap of the football, getting washed down and completely out of the gap by #65 Deonte Brown, creating a wide hole that Harris runs through for a big gain and the first down. Notice how Slaton basically gives up on the play after he is washed down, standing straight up and playing with no urgency to pursue the ball carrier after the runner passes him.

Slaton tends to lose his power at the point of attack when he stands up off the snap, not being able to effectively stack and shed at the LOS and ceding ground to blockers he should handle. Here we see him yet against stand nearly straight up after the ball is snapped, getting no push on the pocket and giving ground for the offensive line to create a surge forward to move the chains and allow Harris into the second level of the defense.

Overall, Slaton can be frustrating to watch on film, as well as it was watching him during summer workouts. He is very talented and has impressive athletic traits for the weight he carries, but his motor is erratic to say the least, picking and choosing what plays he wants to go hard. Slaton also has struggled to maintain good playing weight while with the Gators, causing him to fatigue quickly and have to be pulled off of the field for someone else on the inside that can play multiple downs. He would’ve contributed a lot sooner for the program had his weight and effort been in-check, and while he has improved in both categories since I was there, he still has a ways to go before being considered a player who could see significant snaps on Sundays.

When I look for a potential pro comp for Slaton, Justin Ellis of the Ravens comes to mind as a massive man on the interior that can take up gaps and win man-on-man against the run, and has that sneaky athleticism to generate a pass rush to disrupt the pocket. He will need to learn to play with a better anchor and use his hands to better stack and shed against the run.

But should a team be comfortable in the football character, Slaton could be a late-round target to develop at the back-end of the roster or on the practice squad, as Pittsburgh did with Carlos Davis this season. It remains to be seen if the Steelers would invest in DT late in the draft given the resigning of Tyson Alualu. Should they look to add to the room at the end of the draft, Slaton could be that athletic upside player they could target to try and develop under Coach Dunbar’s watchful eye.