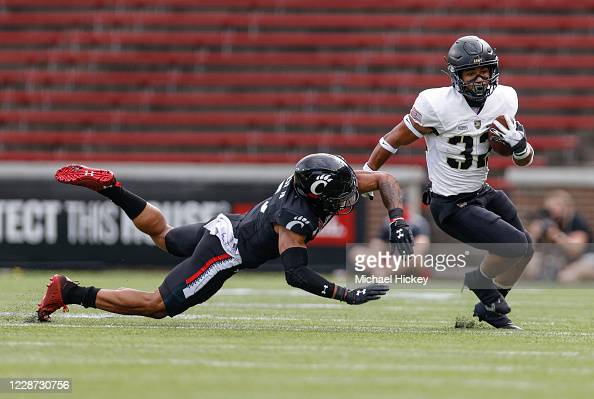 –Twitchy, quick athlete with range in the deep thirds of the field
– Excellent in man coverage, flips hips with fluidity guarding slot receivers and tight ends
– Runs the alley with consistency from depth, willing to make tackles inside and outside of box
– Quick trigger breaking on passes, short routes that allow him to make plays on the ball
– Contributor on several special team units throughout four seasons at UC
– Plays through hands of receivers, ballhawk mentality (five interceptions over last two seasons)
– Played 28 consecutive games to end his career, no injury red flags

Earlier in this draft process, we highlighted the other Cincinnati safety that has received a ton of buzz: James Wiggins. However, when Cincinnati’s pro day rolled around, it was Darrick Forrest Jr.’s pro day numbers that drew a ton of buzz. Forrest ran a 4.42 40 yard dash, jumped 39 inches in the vertical jump and had a broad jump of 11 feet. Impressive day for him, showcasing his ability to make plays on the field, and showcasing how explosive of an athlete he is.

His speed in the 40 yard dash and short shuttles matches the speed he displays on tape. Forrest has nice range on the back end, and this first play against Tulsa in 2020 showcases that. The slot receiver is running a vertical route down the middle of the field, and Forrest runs step for step with him, and does a nice job playing through the hands of a receiver. Nice play to dislodge the receiver’s hands from the ball without drawing a penalty.

Forrest can flip his hips with fluidity and shows no sign of stiffness in his lower half. Also against Tulsa, the receiver runs and out and up, and Forrest is right in his hip pocket on the turn. He stays attached to the hip and forces the ball to be thrown away. His calling card as a safety is playing man coverage.

This next play by Forrest is all about his instincts and showcasing his recovery speed as well. SMU runs a trick play, the results in the receiver throwing back to QB Shane Buechele. Forrest diagnoses the play, recovers and knocks the ball out of Buechele’s hands, saving a touchdown.

While he struggles with eye discipline on the back end in zone, Forrest displays the ability to diagnose route combinations and be in position to make plays on the ball. Against Georgia in the Bearcats bowl game, Forrest has no direct threat in his short zone so his eyes take him to the vertical route running down the seam. Forrest showcases his recovery speed once again and is in position to intercept the pass if he gets his head around quicker. Range is on full display here.

Inconsistent run fits and lack of physicality show up on Forrest’s film at times. Against Tulsa, Forrest is in position to make the tackle and prevent a touchdown, but whiffs on the tackle. Would like to see better effort in that run fit and using form tackling to bring the ball carrier down.

As mentioned above, Forrest is vulnerable to double moves with how quickly he jumps routes. Against Georgia, Forrest bites on the double move from George Pickens and is not able to recover, giving up a big play. His eyes and patience in coverage most become more consistent to be more than a rotational player at the next level.

While Forrest has issues with pursuit angles and filling backside running lanes, he exhibits the ability to run the alley on the frontside of run plays. Against Tulsa in 2019, Forrest kept outside contain on both plays and closes to make the tackle in the open field.

Final play from Forrest reinforces his range and quick reaction timing on throws in his deep third. Aided by pressure from the front seven, Forrest intercepts this pass after coming from the opposite hash to make the play. Really impressive film from the Columbus, Ohio native.

Darrick Forrest Jr. can be a contributor for an NFL team from Day 1. He made 11 tackles on special teams in his four years at Cincinnati, and has value in man coverage. At Cincinnati, he showcased the ability to roll into different zone coverages, play the deep half and deep third as well.

He is a developmental, rotational piece who can be a starter down the road once he cleans up his eye discipline and patience in coverage. Likely a Day 3 option the Steelers can add and compete for an active roster spot, specifically on special teams with his natural speed.