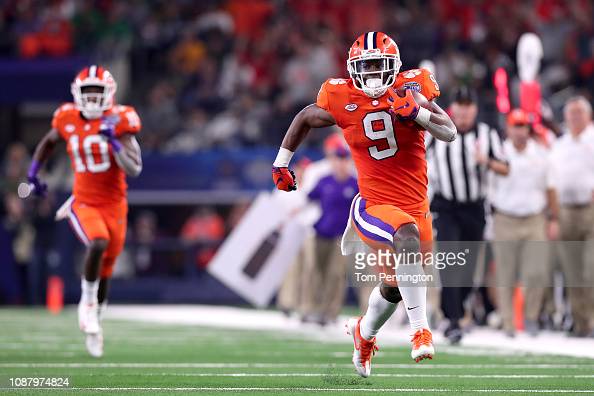 In Lance Zierlein’s post first-wave-of-free agency 2021 Mock Draft, he still has the Pittsburgh Steelers going a conventional route. He has the team taking Clemson RB Travis Etienne at #24 overall. In his explanation of the pick, he writes:

“Pittsburgh has been making due with bigger, less-explosive runners, but Etienne gives the offense an infusion of juice as both a runner and pass catcher.”

A solid assessment of Etienne’s game. In most years, the team has gravitated towards bigger backs like Le’Veon Bell, James Conner, Jaylen Samuels, Benny Snell, and even going back to the Rashard Mendenhall days. Etienne did bulk up to 215 pounds for his recent Pro Day workout but he profiles as a different style of back. Closer to the Anthony McFarland mold, Etienne brings home-run hitting ability to a Steelers’ offense looking to get its running game back on track.

But our scouting report questioned his overall frame, the friendly offense he ran in (and how it impacted him not playing with Trevor Lawrence) and his nasty fumble habit that popped up his senior season. Regardless of how we evaluate him, the Steelers are clearly interested. Mike Tomlin, Kevin Colbert, and Matt Canada attended Clemson’s recent Pro Day. That was to see several different prospects, including WRs Amari Rodgers and Cornell Powell along with OT/OG Jackson Carman, but Etienne was probably at the top of their list.

Pittsburgh will draft a running back within their top three selections and a RB is arguably the favorite at #24. After Day One of April’s draft, it would be no surprise to see Zierlein’s prediction come true.

In his mock, Etienne is one of two running backs taken in the top 32. The other is Alabama’s Najee Harris, drafted at #32 by the Super Bowl winning Tampa Bay Buccaneers. Elsewhere in his mock, three QBs go in the top five with North Dakota State’s Trey Lance taken all the way up at #4 to Carolina (in a draft-day mocked trade with Atlanta). Ohio State’s Justin Fields goes #9 to Denver with Alabama’s Mac Jones taken at #15 by the New England Patriots.