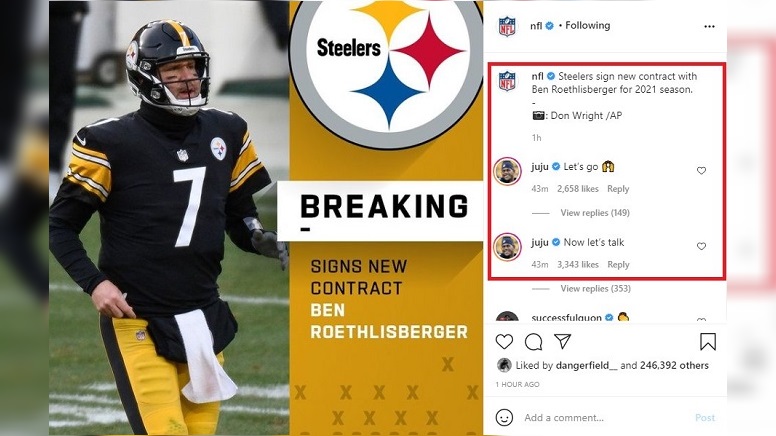 As expected, the Pittsburgh Steelers worked out a new contract with quarterback Ben Roethlisberger and that faux four-year extension resulted in the team clearing $15.34 million in 2021 salary cap space. Part of that Roethlisberger contract redo included the quarterback giving back $5 million he was scheduled to be paid. Right after that news broke, Steelers wide receiver JuJu Smith-Schuster took notice.

As you can see below in his response to the NFL Instagram account posting news about Roethlisberger’s contract getting finalized, Smith-Schuster seems ready to do business and thus work on hammering out a new deal that would keep him in Pittsburgh. As things stand right now, Smith-Schuster is set to become an unrestricted free agent in less than two weeks.

Will the cap savings produced by Roethlisberger’s contract redo be enough to allow the team to re-sign Smith-Schuster? It’s so hard to tell right now and especially with us still not knowing what the 2021 league-wide salary cap number will be. It also depends on if the Steelers get restructures done with defensive end Stephon Tuitt, kicker Chris Boswell and fullback Derek Watt and if they terminate or adjust the contract of inside linebacker Vince Williams. An extension for a few other players such as cornerback Steven Nelson and guard David DeCastro could even be done in order to free up a little more 2021 salary cap space.

More than anything else, it really boils down to how bad the Steelers want Smith-Schuster back. Even at a market value of around $17 million per year on a new deal, the Steelers could possibly get him re-signed if they really want to.

We know that Smith-Schuster really wants to stay in Pittsburgh and in the next two weeks we’ll find out if he’ll indeed continue his NFL career with the team that originally selected him in the second round of the 2017 NFL Draft out of USC. Time is ticking, however, as March 17 will be here soon and that’s the official date when Smith-Schuster is scheduled to become an unrestricted free agent.