The Pittsburgh Steelers didn’t sign any more players on Tuesday, but they did cut one as the contract of cornerback Steven Nelson was terminated. That means that the Steelers 2021 salary cap situation changed quite a bit on Tuesday.

Let’s start first again with what the NFLPA shows on Tuesday night for the Steelers. They still have the Steelers with 58 players under contract for the 2021 season and the team $6,454,586 under the cap. Those numbers, however, still do not include the cutting of Nelson and the new contracts of linebacker/safety Miles Killebrew, tackle/guard Joe Haeg, cornerback Cameron Sutton, defensive lineman Chris Wormley, wide receiver JuJu Smith-Schuster and wide receiver Tyler Simmons, so that is especially important to note when looking at that number. That number also does not include the 2021 offseason workout placeholder amount of $792,000, which will also be hitting soon.

Factoring in the recent contracts signed by Killebrew, Haeg, Sutton, Wormley, Smith-Schuster and Simmons, along with the contract termination of Nelson on Tuesday, the Steelers currently sit right at around 8,365,086 under the salary cap for 2021 as of Tuesday night. The only exact numbers not known of those six players is Killebrew, but his one-year deal is likely a qualifying contract and matches the contract given to center B.J. Finney. That estimated cap number also accounts for the offseason workout placeholder amount.

As previously posted, roster displacement will help cover a large chunk of the cap space needed to sign the team’s eight current draft selections. In fact, right now the team needs an estimated $2,154,553 in salary cap space to sign all eight draft picks they are scheduled to have based on their current Rule of 51 status.

The Steelers will still need to account for a full practice squad, a 52nd and 53rd roster player and whatever extra cap space they want to have available for the start of the regular season. That’s around another $10.5 million that needs to be accounted for and on top of the $2,154,553 needed to sign their 2021 draft class.

The Steelers still have the ability to free up some salary cap space moving forward via contract restructures with defensive end Stephon Tuitt and kicker Chris Boswell being the two biggest candidates for such. restructuring those two players would create another $5.01 million in 2021 salary cap space. 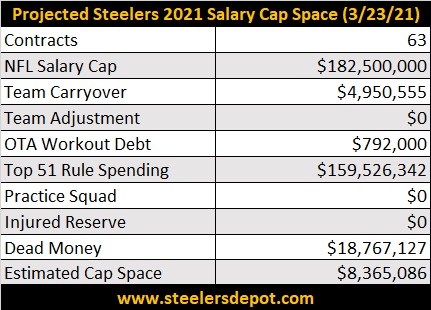