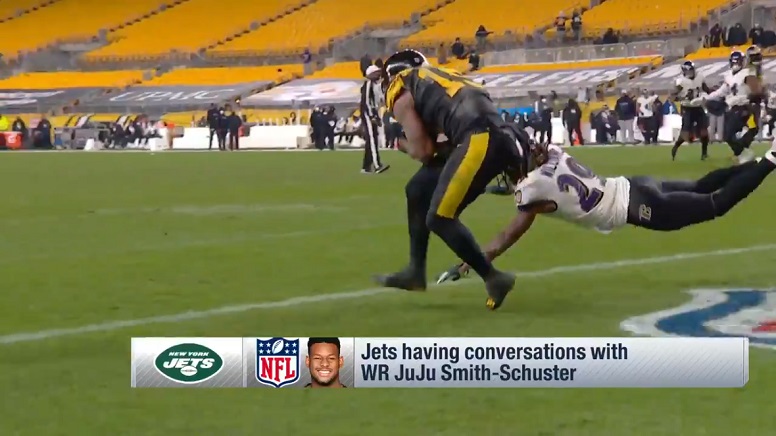 The second day of the 2021 NFL league year is starting to wind down and as of the time of this post, Pittsburgh Steelers unrestricted free agent wide receiver JuJu Smith-Schuster remains unsigned. Thursday afternoon, Ian Rapoport and Tom Pelissero of the NFL Network both weighed in on the latest with Smith-Schuster and how he’s received interest from the Jets while still having conversations with the Steelers.

“Yeah, well, the Jets have been having ongoing conversations with Juju Smith-Schuster over the course of the last, I would say day or so,” Rapoport said Thursday. “And you know, to some, this would seem a little odd. They added a receiver in free agency, they signed Corey Davis. Gave him a massive deal about $12 million or a little more per year and you would figure the Jets are probably done, right? They’ve got Denzel Mims, they’ve got Jamison Crowder. I’m not so sure they’re done adding a receiver and JuJu Smith-Schuster does seem to be the one of the receivers that they are considering.

“You know, his market had been a little slow to develop, certainly picking up over the last, I would say day or so. The Pittsburgh Steelers also have maintained some interest in potentially bringing him back as well. this is something to keep an eye on. I mean, the Jets are trying to spend, they’re trying to get better in all the right spots, add some impact players. JuJu Smith-Schuster would make a lot of sense, especially when you consider his college quarterback was Sam Darnold.”

Pelissero also weighed in on what he knows on the latest with Smith-Schuster.

“At some point, here, if you’re a team that has been sitting on cap space like the Jets are, you might see opportunities to get guys a little bit cheaper than you would in a normal market given that the cap for everybody has gone down,” Pelissero said. “That Corey Davis deal, we knew he was going to do well, but it is a surprise that he has set the market at this point at $12.5 million a year, $27 million fully guaranteed over the first two years. For JuJu, weighing multiple options, the Steelers have remained engaged. This one may take a little bit, but it’ll be fascinating to see whether the Jets could double up in free agency.”

So, there you go. That’s the latest. It certainly seems like the Jets and the Steelers are currently the only two teams talking to Smith-Schuster. Will he get signed in the next 24 hours? One would think he would.

If the Steelers wind up re-signing Smith-Schuster, they will need to create cap space in order to afford him. They entered Thursday $3,297,586 under the salary cap and have since re-signed defensive lineman Chris Wormley and that’s sure to eat into that amount just a little.

JuJu's market has picked up over the last day, per @Rapsheet. Steelers "maintain some interest." pic.twitter.com/64MLoGmB6a