With the last Saturday before the start of the 2021 NFL league year winding down, I figured several of you might like to see a real-time salary cap update for the Pittsburgh Steelers on the heels of all that has happened the last several days.

Let’s start first with what the NFLPA shows on Saturday for the Steelers. They show the Steelers with 56 players under contract for the 2021 season and the team $5,847,086 under the cap. Those numbers do include the contracts of wide receiver Ray-Ray McCloud, inside linebacker Marcus Allen and center J.C Hassenauer. Not included in that NFLPA update are the contracts of center B.J. Finney and inside linebacker Robert Spillane.

Next, we have the Saturday tweet from Field Yates concerning the Steelers salary cap situation and it shows the team $4,727,586 under the cap. That number, however, includes Finney’s new contract as well as the NFL’s annual offseason Workout Bonus Placeholder amount, which for 2021 is $792,000. The NFLPA page has not yet implemented that amount and they usually don’t until early April. Yates’ numbers include it, however, so with it forthcoming, let’s go ahead and account for it in this update.

A look at how much cap space each team, per the NFL’s accounting. This reflects only moves that have been *officially* made.

Previously reported moves are noted next to their respective teams. pic.twitter.com/KVeXY0G6fQ

As for Spillane, who’s contract is not included in the NFLPA or Yates Saturday update, his one-year restricted tender that he is expected to sign soon should total out at $850,000. We shall go ahead and account for that as well with it being reported on Saturday.

Will the Steelers sign more players or cut a player or two before Wednesday at 4 p.m. EST? It’s possible. Maybe they will surprise us with another restructure or two and maybe an extension as well. Don’t hold your breath for the latter two things, however. A contract termination or pay reduction is the most likely thing to happen in the next few days.

Please be advised that the Steelers will have other predictable fixed costs they will need to account for after March 17 and I outlined those in a post a few days ago. For all practical purposes, however, the Steelers are $4,537,586 under the cap as Saturday night comes to a close. 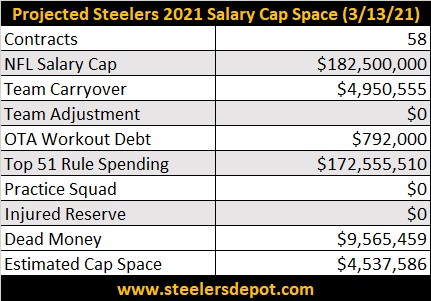