We are nearing the end of the first week of the NFL’s 2021 free agent signing period and things have now slowed down considerably. As for the Pittsburgh Steelers, the team made a few free agent signings over the weekend in linebacker/safety Miles Killebrew and tackle/guard Joe Haeg. With most of the contracts now reported, we can now take a quick look at where the Steelers currently sit at salary cap-wise as Monday night comes to an end.

Let’s start first again with what the NFLPA shows on Monday night for the Steelers. They have the Steelers with 58 players under contract for the 2021 season and the team $6,454,586 under the cap. Those numbers do not include the contracts of Killebrew, Haeg, cornerback Cameron Sutton, defensive lineman Chris Wormley, wide receiver JuJu Smith-Schuster and wide receiver Tyler Simmons, so that is especially important to note when looking at that number. That number also does not include the 2021 offseason workout placeholder amount of $792,000, which will also be hitting soon.

Factoring in the recent contracts signed by Killebrew, Haeg, Sutton, Wormley, Smith-Schuster and Simmons, the Steelers currently sit $895,086 under the salary cap for 2021 as of Monday night. The only exact numbers not known of those six players is Killebrew, but his one-year deal is likely a qualifying contract and matches the contract given to center B.J. Finney. That estimated cap number also accounts for the offseason workout placeholder amount.

Will the Steelers trade or cut cornerback Steven Nelson soon? If they do, that move would create $8.25 million in 2021 salary cap space prior to roster displacement taking place. $7.47 million after displacement.

I’ll provide another salary cap update for the Steelers whenever there is more movement, which should be sometime later this week. 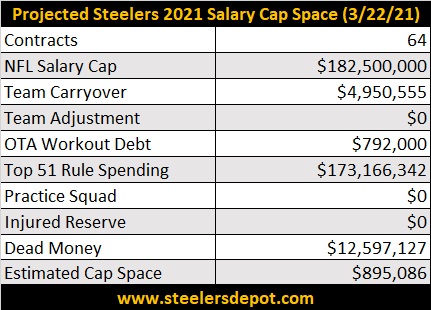