The Pittsburgh Steelers reworked the contract of tight end Eric Ebron recently and re-signed outside linebacker Cassius Marsh to a one year-year contract on Wednesday as well. While the exact numbers aren’t yet reported on both of those transactions, it’s quite easy to guess what the new salary cap charges for both players will be once they are filed with the NFLPA. With that, I can now provide another salary cap update for the 2021 Steelers.

As I reported Wednesday morning, the reworking of Ebron’s contract probably included four voidable years being added so that his roster bonus and chunk of his base salary he was due in 2021 could be turned into a signing bonus. If that’s what happened, and there is no reason yet to think otherwise, Ebron’s 2021 cap charge dropped $3.94 million.

As for Marsh, his one-year deal with the Steelers is likely a signing benefit contract. The only thing we do not know is if the Steelers gave him the maximum allowed $137,500 signing bonus. For now, I am going to assume they didn’t and if that’s ultimately the case, Marsh’s cap charge in 2021 will be set at $850,000. Such a charge would use up just $70,000 in salary cap space. We will find out for sure in a few days. The most cap space his deal should use up is $207,500 after roster displacement.

Based on all signings to date and closely estimated numbers for the deals yet to be filed, the Steelers are estimated to be $12,235,086 under the cap as of Wednesday night. That number also included the $792,000 workout bonus placeholder charge.

If you follow the table of data from top to bottom, you will see that the Steelers effectively are in the hole $279,467 when it comes to covering their future cap costs based on the cap room they have at the time of this post. The team, however, can still create more cap space by restructuring the contracts of defensive end Stephon Tuitt and kicker Chris Boswell at some point during the remainder of the offseason. 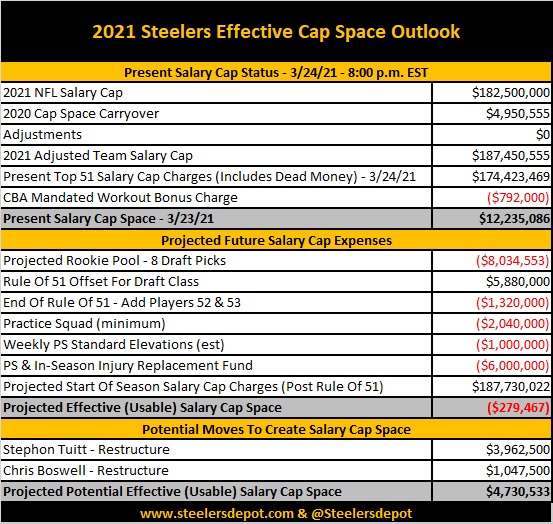