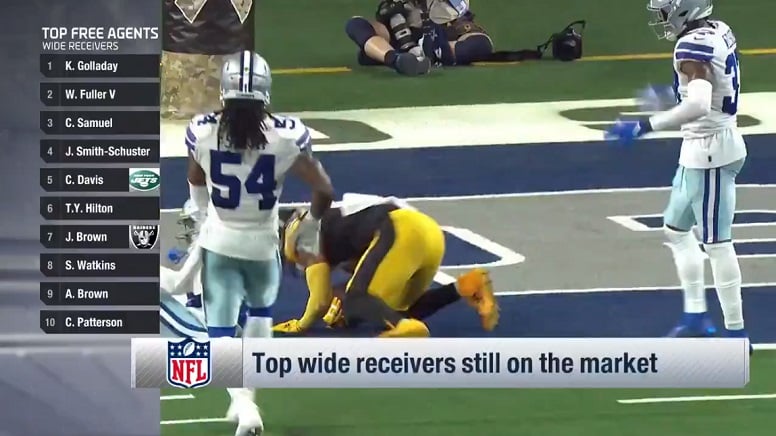 While there have been several free agent wide receivers that have already agreed to deals ahead of the start of the 2021 NFL league year on Wednesday. Pittsburgh Steelers wide receiver JuJu Smith-Schuster is not one of them. That could change very soon, however, and especially with the legal tampering period about to end. Why hasn’t Smith-Schuster found himself a suitor yet? It might because he’s overvalued himself, at least that’s what a few of the analysts at the NFL Network think.

“So, a lot of teams are looking at the top of the market and a lot of those guys had a number in their mind and they’re just not getting it right now,” Mike Garafolo said on Wednesday. “JuJu Smith-Schuster is one of them. And everything in Pittsburgh was, you know, we’ve got a certain value on him, he’s got a certain value on himself, we don’t agree on that. And so, he’s going to have to go elsewhere this upcoming season. Well, now JuJu went to the market and just having that same conversation with the entire market right now. So, yeah, a lot of these guys are finding it difficult.

Smith-Schuster isn’t alone, however, as a few other top named free agent wide receivers still remain unsigned, and that list includes Kenny Golladay and T.Y. Hilton. We are seeing a few other free agent wide receivers rated lower than those three already agree to lower-valued deals with a few of those contracts being for just one year. Will Smith-Schuster have to also settle for a one-year deal as well?

“So, what do you do a lot of times in those cases? You take a one-year deal,” Garafolo said. “I think about Alshon Jeffery who did it and then wound up signing an extension with the Eagles. So, you may see a little bit of that for some of these top guys on the market here as we continue to work our way through it.”

To give a little bit of perspective on this Wednesday, the Arizona Cardinals just agree to terms with former Cincinnati Bengals wide receiver A.J. Green on a one-year contract worth up to $8.5 million. Smith-Schuster obviously is worth more than he is.

A.J. Green is expected to sign a one-year deal worth up to $8.5 million, including $6 million guaranteed, with the Arizona Cardinals, per source. https://t.co/YchGNvviAw

Should Smith-Schuster wind up signing a one-year deal, it’s hard to imagine it will be with the Steelers because of the high salary cap charge in 2021 that would come with that. While the Steelers still could clear some salary cap space via contract restructures and an extension or two, it still would present a huge challenge for them to afford a cap charge of $10 or million on a player such as Smith-Schuster.

Today could be the day for JuJu #Steelers pic.twitter.com/oOy0fXeu1f