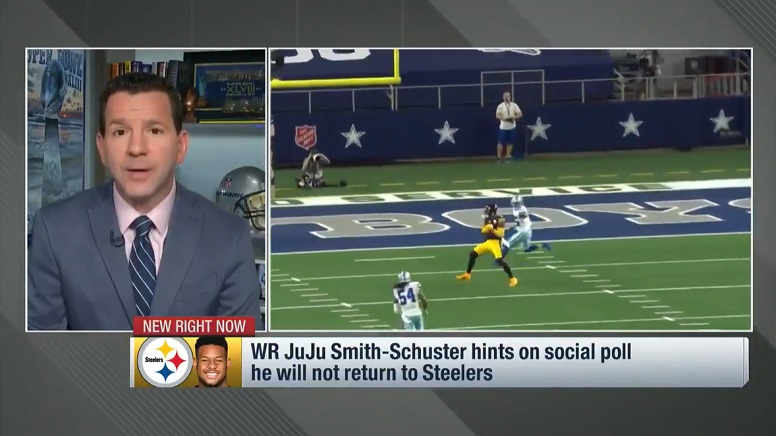 On Thursday, Ian Rapoport of the NFL Network reported that the Pittsburgh Steelers were still hoping to work out something contractually with wide receiver JuJu Smith-Schuster to prevent him from leaving via unrestricted free agency. On Friday, Rapoport was a guest on ‘The Pat McAfee Show’, and he was asked to give an update on the chances the Steelers have to ultimately re-sign Smith-Schuster.

“I mean, I would say like 10 percent,” Rapoport said. “So, they could do it, but they would have to do some cap gymnastics. I just, I imagine he will have a better opportunity somewhere and it doesn’t feel likely. They’re talking, the Steelers are trying, it’s just, when a player is going to have such a good market somewhere else, the team doesn’t feel like they can re-sign.”

Rapoport goes on to say he could see Smith-Schuster signing just a one-year deal in free agency if the market does not recognize him as being worth around $16 million per season or more, which is his true value.

“But JuJu is actually really interesting because, you know, obviously he’s very talented, he’s one of the top receivers, but he’s kind of been like up and down the last couple years,” Rapoport said. “I wonder if he takes like a really strong one-year deal and says, ‘you know what, I’m not going to lock myself in on three for $33 [million]’, let’s just say. That’s a fake number. Well, let’s just say three for $33. ‘I’m not going to lock myself in. I’ll take one for $10 [million] and then go make $16 [million] a year the following year. I could see a one-year deal coming. That’d be interesting.”

I really doubt Smith-Schuster takes a one or two-year deal this offseason, but stranger things have happened. At the very least, however, we’ve learned that the Steelers are still attempting to retain Smith-Schuster with less than a week to go before he becomes an unrestricted free agent.

Ian R. on Juju "I would say 10%. They could do it but they would have to do some cap gymnastics. I imagine he will have a better opportunity somewhere" #Steelers pic.twitter.com/CmlESyInvn