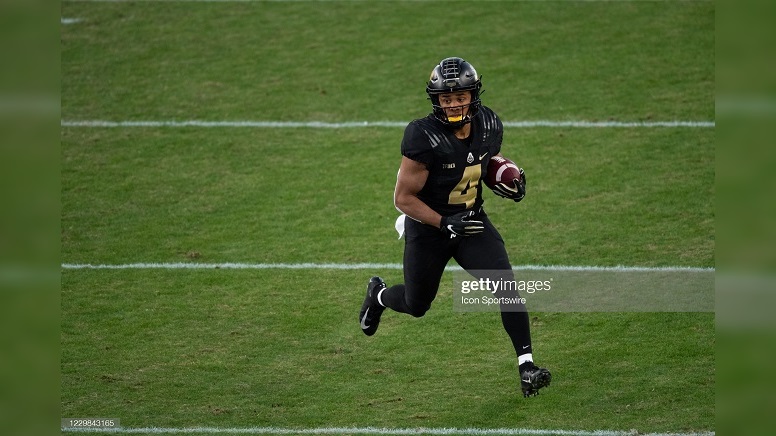 Yes, Rondale Moore knows he’s short. No, he doesn’t think that’s going to impact his NFL career. At Tuesday’s Pro Day, Moore measured in at just 5’7. But he tested off the charts and believes he has the skillset to translate to the NFL.

In a press conference after his Tuesday workout, Moore talked about why his height shouldn’t be a concern. And definitely isn’t something he’s worried about.

“I don’t really get into all that,” Moore said. “When I’m out there, I was just playing and trying to to execute whatever is called. I don’t really get into the numbers of how tall someone is, how fast they run or anything like that for. The slogan I’ve always used is, ‘how tall is a good football player’? I don’t think that’s a number you can put on it.”

Slowed by injuries the last two seasons, Moore was one of college football’s most dynamic players in 2018. As a freshman, he caught 114 passes for 1258 yards and 12 receiving touchdowns. He found the end zone twice more on the ground while also serving as the Boilermakers’ kick and punt returner. That year, he was given the Paul Hornung Award for college football’s most versatile player.

Moore compared his NFL path to Deebo Samuel, a 2nd round pick of the San Francisco 49ers in 2019.

“Deebo Samuel is a big one. I think he does a lot of the same stuff I did here at Purdue for the Niners and obviously has a lot of success doing it.”

At his workout, he wowed scouts with his testing, running a sub 4.3 40, a 42.5 inch vertical, and a three-cone time in the mid-to-high 6.6’s. An outstanding number but not a surprising one for those who’ve watched him play.

Though he’s undersized, don’t mistake a lack of height/weight for a lack of strength. Pound-for-pound, he’s one of college football’s strongest prospects. Moore tweeted out this clip of him putting up 24 reps on the bench press, a fantastic number for any wide receiver, especially a 5’7 one.

Didn’t bench today, but here’s 24 for those of you wondering. pic.twitter.com/SI3paBjRy9

For the Steelers, Moore is unlikely to land heavily on their radar. In his presser, Moore said Pittsburgh hasn’t had any contact with him. Following JuJu Smith-Schuster re-signing, it’s unlikely the team targets a WR in the top two rounds.

Wherever Moore lands, he’s excited to land in the league for two primary reasons.

“What I’m looking forward to or excited about in the NFL is one, going to take care of my mother. I think that’ll be really big for me. Two, what you get in the business for and that’s to go to and win a Super Bowl. So those are two things I’m really excited about.”

He’s currently considered a late first round pick to mid second round selection, probably off the board before the Steelers are even on the clock at #55.