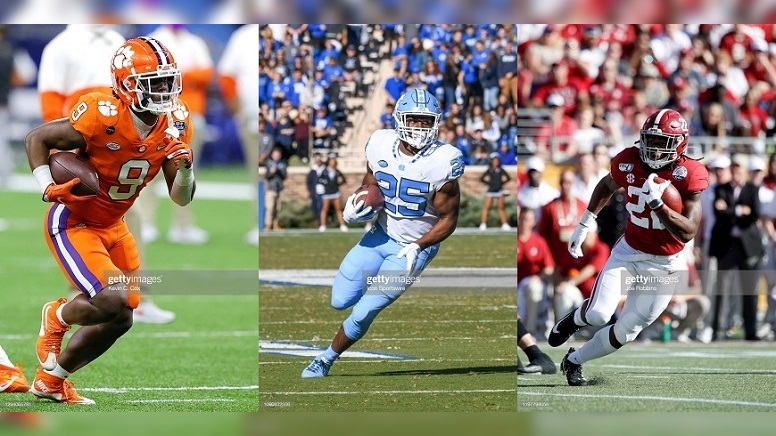 Who is the top running back in the 2021 NFL Draft class? It probably depends on who you ask at this point of the pre-draft process and that’s not overly surprising. For quite a while, at least since the 2020 college football season ended, it seemed as though Alabama running back Najee Harris was the consensus top at his position in this year’s draft class. Now, while far from scientific reasoning, it seems like Harris has fallen out of favor with a lot of the major media draftniks. In fact, Pro Football Focus now has Harris ranked third overall.

Pro Football Focus now has both Travis Etienne and Javonte Williams ranked ahead of Najee Harris on their 2021 NFL Draft Big Board. #Steelers #NFLDraft2021 #NFL pic.twitter.com/69enEZ3tz7

Daniel Jeremiah recently announced during his pre-pro day media session that his next set of rankings would have Williams as his top running back and he briefly explained why.

“I’m getting ready to update my list. The next time I update it I am probably going to have Javonte Williams from North Carolina over [Najee] Harris,” Jeremiah said. “He is a really good player. To me he would be a great, great fit with Pittsburgh. I wouldn’t have any problems. I know people kind of look at the running back thing one way or the other. When you’re picking down there in the bottom of the first round and you’ve got a chance to get an impact player like Javonte Williams from North Carolina, to me, I think that would be a heck of a pick.”

There’s really been no signal as to why Harris has seemingly dropped in a lot of the national rankings. Maybe it’s his age or maybe it’s the fact that his explosive run percentage in college wasn’t as high as that of Etienne and Williams. That would really be my main guesses as Harris’ tape does look good overall. Maybe it’s the fact that Etienne and Williams show a little more ability closer to the line of scrimmage when needing to create.

What does all this mean when it comes to the Steelers? For one, I’m convinced now that the Steelers will wind up drafting one of Harris, Williams, or Etienne and quite possibly in the first round. Steelers head coach Mike Tomlin and offensive coordinator Matt Canada were both present at the Clemson pro day along with general manager Kevin Colbert and they appeared to show some serious interest in Etienne while there. The North Carolina and Alabama pro days are still yet to come, however, so it’s a good bet that trio of Steelers personnel will be front and center at those events to see Williams and Harris go through their paces.

In the end, rankings are just rankings so take them for what they are. We’ll wait and see how many more times PFF flips their running back rankings in the coming weeks. In the meantime, however, we’ll keep studying these top three running backs as part of the process and knowing them inside and out because once again, odds are rather good one of the three will be drafted by the Steelers several weeks from now, rankings be damned.