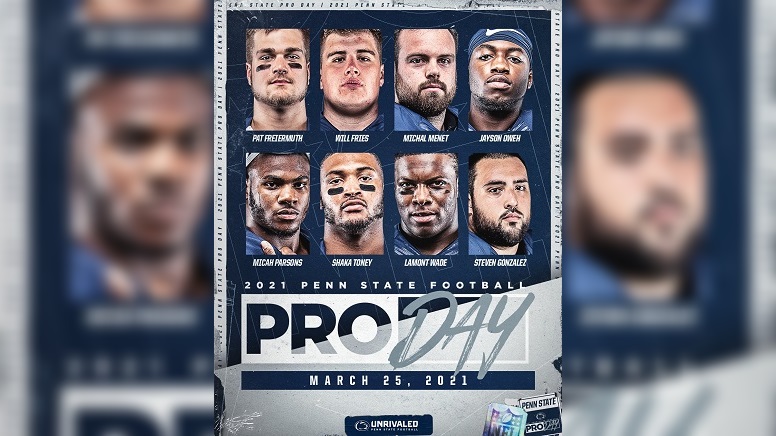 The Pittsburgh Steelers are not reluctant to draft or sign local, by any means, whether that’s referring to local Pennsylvania schools or area natives. James Conner, Jesse James, and Marcus Allen are some recent examples of ‘local’ alumni who have played a meaningful role for the team.

Whether or not they are always active in scooping up the talent, however, they are always in attendance, and why wouldn’t they be? They’re right in the area, after all, and there is talent at these schools. After all, the best defensive player in the league is Aaron Donald, a Pittsburgh alumnus.

This year’s draft class is going to feature a number of highly-rated players out of Penn State, who hosted their Pro Day yesterday with head coach Mike Tomlin in attendance. According to the Big 10 Network broadcast, he was rather impressed “The numbers are as expected, but this is a freak show out here”, he was quoted as saying.

Some of the notable players running on the day were edge Jayson Oweh and linebacker Micah Parsons, both of whom indeed freakish numbers. Both of them posted Pro Day 40s times in the mid 4.3-second range, though of course one has to account for the human element in hand-timed numbers.

The Steelers have had their fair share of athletic freaks over the years, and in particular it’s something that they have come to prioritize at the linebacker position. Devin Bush is the most recent example at inside linebacker, such that they moved up 10 picks in the first round in 2019 in order to draft him.

With that said, they haven’t exactly become Al Davis’ Raiders under Tomlin, who refers to things like Pro Days and the NFL Scouting Combine as the ‘underwear Olympics’. Testing numbers only tell you so much about who a player is, even what they are capable of.

Parsons is a player whom many have as the top linebacker coming out of college this year, or if not close to it, and if so, the Steelers don’t have a great shot at landing him, assuming they are targeting the position, even with their top pick.

Oweh, however, is somebody who could possibly be available on day two—maybe even day three, and they could certainly stand to add to the edge after losing Bud Dupree and Olasunkanmi Adeniyi. T.J. Watt is still here, with Alex Highsmith expected to move into the starting lineup, but they have only Cassius Marsh, a veteran journeyman, behind them.

Another name of note is tight end Pat Freiermuth. He didn’t get much of an opportunity to put his freak show on display because he is recovering from shoulder surgery, but he did some workouts, conducted by new Steelers tight ends coach Alfredo Roberts. If he is available in round two, he would certainly be tempting.