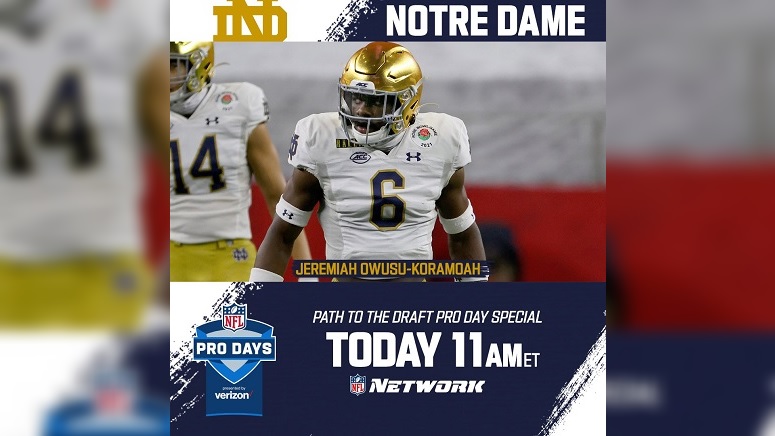 Though it comes as little surprise, Mike Tomlin and Kevin Colbert have made the trip from Ohio State to Notre Dame and are attending the Fighting Irish’s Pro Day today.

Add head coaches Frank Reich and Mike Tomlin to the list of attendees here at ND.

Notre Dame has several top prospects to watch. At least two of them could be drafted in the first round – linebacker/safety Jeremiah Owusu-Koramoah and offensive tackle Liam Eichenberg. Both would make for good fits with the Steelers. Offensive linemen Aaron Banks and Robert Hainsey, the latter a Pittsburgh native, also fit the Steelers later in the draft.

TE Tommy Tremble is one of the best in-line blockers of the class. The Steelers have shown interest in EDGE Daelin Hayes, likely a Day Three selection, while WR Ben Skowronek is a late Day Three/Priority UDFA candidate.

We’ll see who the third member of the coaching staff made the trip with Tomlin and Colbert. Perhaps it’ll be offensive line coach Adrian Klemm, who joined the two yesterday at Ohio State’s workout.

Update (5:13 PM): One of the Steelers’ offensive line coaches, either Klemm or assistant Chris Morgan, made the trip.

Below are some of the scouting reports we’ve written on Notre Dame prospects.