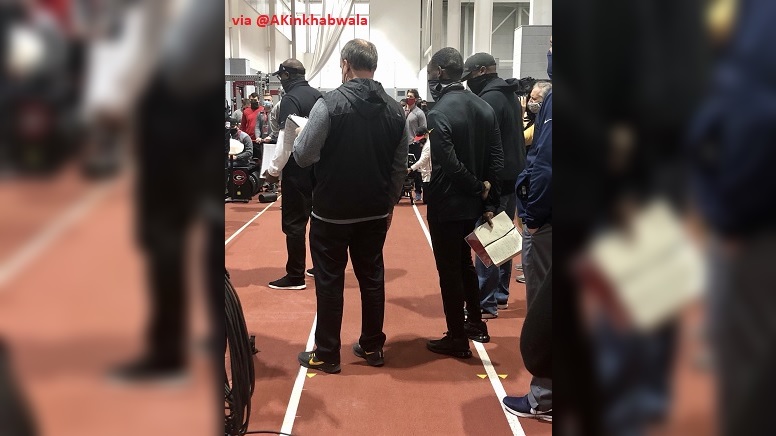 Mike Tomlin and Kevin Colbert are back on the Pro Day circuit, showing up at the Georgia Pro Day Wednesday. That’s according to multiple reports and photos, including one from NFL Network’s Aditi Kinkhabwala.

Colbert and Tomlin may also be standing next to new secondary coach Grady Brown. We’ll try to confirm that throughout the day.

The Bulldogs have a slew of top prospects in this year’s draft, largely on the defensive side of the football. CB Eric Stokes and Tyson Campbell are two of the better cornerbacks in this year’s class. Stokes led the team with four interceptions last season while Campbell recorded 29 tackles and picked off one pass. There’s also EDGE rusher Azeez Ojulari, one of the top pass rushers of this class. Last season, he racked up 9.5 sacks and forced four fumbles.

On offense, Georgia has two draft eligible offensive linemen. Highlighted by center Trey Hill, a projected Day Two pick, who weighed in at 6’3/4, 319 pounds. He began his college career at guard before moving to center and profiles as a mauler in the run game. There’s also Ben Cleveland, one of the largest players in the draft at 6’6, 345 pounds. He has a chance to be taken on Day Three.

This is the second Pro Day Tomlin and Colbert have attended. They showed up for Clemson’s workout last week. Be sure to follow our Pro Day tracker which we update almost daily.

Below are the player profiles we’ve written on Campbell, Hill, and Ojulari.