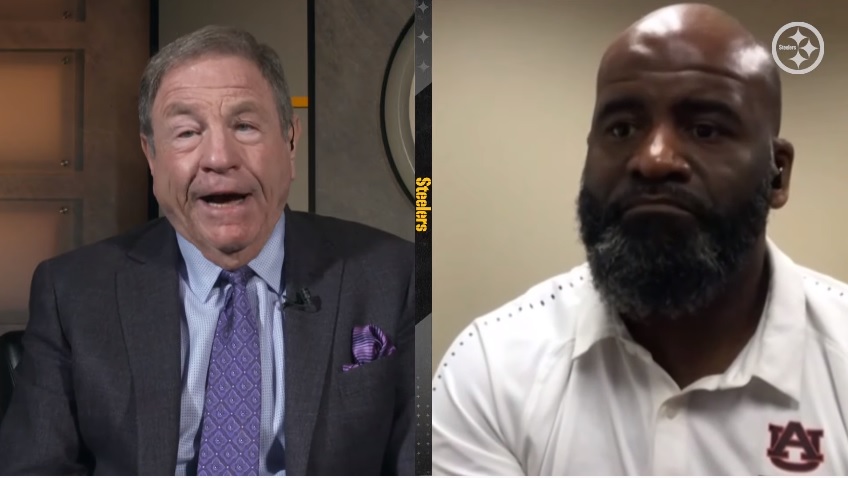 I love getting to hear interviews from former Pittsburgh Steelers. Especially the offensive linemen. Because they weren’t exactly the guys the media wanted to talk to every week during their playing days. In a recent interview posted this morning on the Steelers’ YouTube channel, Stan Savran has a terrific conversation with former Steelers’ guard Kendall Simmons. Simmons shared a dozen great stories but the one about Aaron Smith helping him after Simmons’ tore his ACL might’ve been the most impactful.

“I tore my ACL two weeks into training camp,” Simmons told Savran. “Me and Aaron Smith were engaged in a pass rush. And the crazy thing about it my wife was pregnant with my oldest. She was walking down the hill at training camp and she saw me when I went down…that was my very first major injury.”

Simmons would be placed on IR and miss the entire 2004 season, a magical run that saw Ben Roethlisberger and the Steelers win 15 straight games. Two weeks after his injury, Simmons’ first child was born.

Simmons told Savran it was the man involved in his injury, Smith, who gave him the perspective needed to handle the emotional toll of a season cut so short.

“One person who made it easier for me making the transition was Aaron Smith. Aaron did a whole lot for me during my career. That was one of the first major things he helped me with off the field. He said, ‘Kendall, people don’t recognize professional athletes don’t really get to see their families grow up. You have your first child being born. I know you love football but take advantage of being a father and enjoy that time. It’s going to suck watching us and not being out here. But you’ll never get that time back with your kid.”

It’s an important point about these players. We just view them as football players. The Steelers’ starting guard, the backup cornerback, whatever position they play. But they have lives too. And the life of a professional athlete has its unique challenges. Simmons said Smith’s viewpoint helped him cope with his torn ACL

“That made sense to me. And it really helped me. It took me a minute to accept it but it helped me.”

The Smith family would later discover the value and strength of family. Smith’s son was diagnosed with leukemia as a child. Thankfully, he beat the disease and was late named cancer-free.

Obviously, no one wanted to see Simmons go down injured. The Steelers were worse off because of it. The good news is he returned to start every game in 2005. And that story is a great lesson in Steelers’ veteran leadership and a reminder of how good those 2000s Steelers’ teams were. On and off the field.