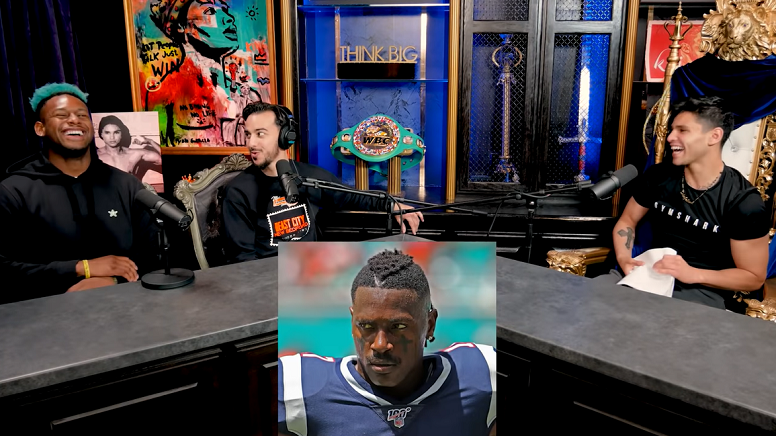 How much would you pay to see JuJu Smith-Schuster and Antonio Brown in a boxing match…and who would you want to win? Because at least one of the two former Pittsburgh Steelers wide receiver is on board with it.

The former recently participated in a podcast with Ryan Garcia, Fierce Talk, in which the now free agent wide receiver discussed a variety of topics. At one point, he was asked, ‘if you could call out anyone and why, who would it be’, meaning who would he choose to box.

“We talked about this multiple times. I’d definitely call out AB”, he said, with a big smile on his face. The two were teammates in 2017 and 2018 during Smith-Schuster’s first two seasons in the league before Brown forced his way off the team. But this does not appear to be mean-spirited in any way.

Nevertheless, the social media-savvy 24-year-old made it clear that he knows his comment will create buzz, joking, “this is about to be the thumbnail” for the video. But he reiterated that celebrity boxing is something that they had talked about. “We talked about this all the time, and it was like, man, if we could have somebody like DJ Khaled fight, like, E40, or T-Pain versus like Future or something…”.

The two on the surface appeared to have a good relationship, and Smith-Schuster clearly tried as much as he could to be the student to the teacher. When he came into the league, Brown was among the top players in the game, and the rookie, not even old enough to drink, we just trying to learn as much as he could.

But Brown seemed to turn on him over time, particularly while he was trying to orchestrate his way out of Pittsburgh. Smith-Schuster fumbled late in a loss against the New Orleans Saints in a game that lost the Steelers their ability to control their playoff destiny. Even though the odds of a comeback in that scenario were already long, Brown placed the blame on their missing the playoff squarely on the young receiver.

Publicly, Smith-Schuster tried to be the good sport and for a while wouldn’t have anything negative to say about Brown, even when the opposite wasn’t true. I would imagine that since then any major bad blood that may have existed between the two subsided.

I have no knowledge of their personal relationship, and I don’t care, either, to be quite frank. It’s already known that current members of the Steelers continued to hang out with Brown. Even Diontae Johnson, who was never a member of the team at a time that would have overlapped, has worked out with the potential future Hall of Famer.

But Smith-Schuster may be the first to get a chance at punching him in the face.