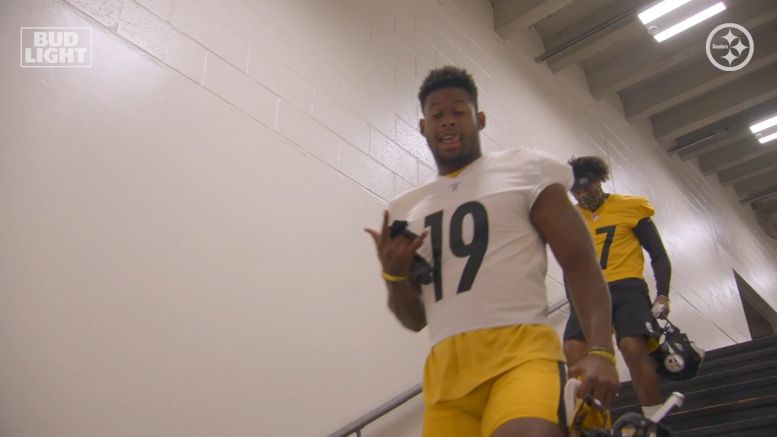 The price to retain JuJu Smith-Schuster may have just gone up. It’s looking more and more likely he’ll be the top free agent on the market when the new league year kicks off March 17th. Because all of the other top receivers are expected to be franchise-tagged by their current clubs.

Buccaneers informed WR Chris Godwin he is being franchise tagged, per source.

Jeremy Fowler followed that up by tweeting the Chicago Bears intend to do the same with Allen Robinson. Ditto with the Detroit Lions and Kenny Golladay.

We know Smith-Schuster will not be getting tagged. Just like the case with Bud Dupree, the Steelers simply can’t afford to put the tag on any player this year. Unless a contract gets hammered out within the next week, Smith-Schuster will hit the open market as arguably the top receiver. Other receivers expected to become free agents include the Carolina Panthers’ Curtis Samuel, Tennessee Titans’ Corey Davis, and Houston Texans’ Will Fuller. But none are expected to command as much money as the 24 year-old Smith-Schuster, bouncing back in 2020 after an injury-marred 2019 season.

Should Golladay and Robinson get tagged, that may cement the idea that Smith-Schuster will earn at least $16-17 million per year from whichever team signs him. With the way the cap can be massaged, Pittsburgh could afford that, even knowing how tight against the cap they are. But they are likely to be competing with a half-dozen other teams trying to snag the top free agent receiver available. Odds are, that’s going to drive his price up even more.

Smith-Schuster, however, has repeated a desire to stay in Pittsburgh. Ben Roethlisberger’s return does improve those odds. At this point, it’s hard to say if JuJu will be playing with the Steelers in 2021 or not. But whichever team signs him better be ready and willing to open up their checkbook.

Well this took a quick turn. This report says Kenny Golladay won’t be tagged and will hit the market. Smith-Schuster’s market will still be hot as one of the top, and arguably still the top, receiver available.

No final decision on whether Detroit may use a tag on someone else, but it appears Golladay is headed to the market.

Lions have informed WR Kenny Golladay that they will not use their franchise tag on him, as @TomPelissero reported. Golladay is headed to free agency.