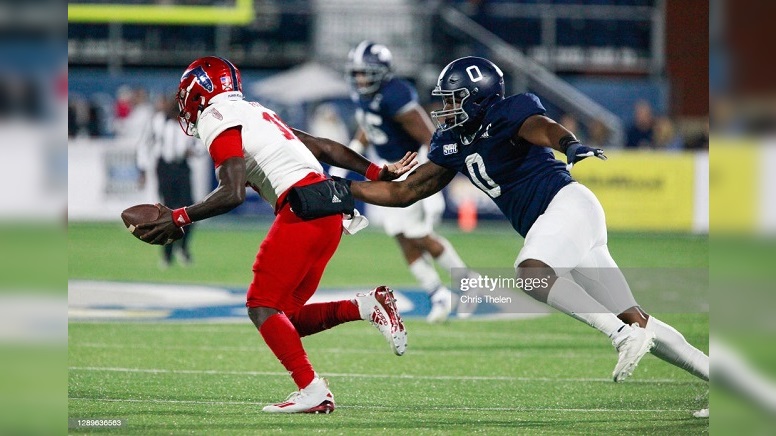 The Georgia Southern pro day is one of several college pro days taking place on Thursday. During the Georgia Southern media session with players on Thursday, defensive end Raymond Johnson indicated that the Pittsburgh Steelers are one of three teams he’s had conversations with during the pre-draft process, according to Andrew Goldstein of WSAV-TV.

Raymond Johnson says he’s had conversations with the Rams, Steelers and Panthers.

Projected as a mid-round pick, hoping he’s raised his draft stock after today.

Johnson declared for the 2021 NFL Draft as an underclassman back in December.

I love you eagle nation 💙💛💙💛 it’s been a hell of a ride pic.twitter.com/me9BQcUxr0

Listed at 6-3, 270-pounds, Johnson registered 146 total tackles and 15 sacks during his college career at Georgia Southern. five of those sacks came during the 2020 season. He also forced one fumble last season.

Johnson played in and started all 13 games in 2020 on his way to logging 598 total snaps (557 on defense, 41 on special teams). He was voted second-team All-American at edge defender and first-team all-conference selection by Pro Football Focus.

While we do not have a scouting profile done yet for Johnson, look for one to be posted in the next few weeks. The Steelers could have more than just passing interest in Johnson as they might draft a defensive end type this year.

Raymond Johnson III (@x_jay6) of Georgia Southern takes a great rush angle, times the OL's punch & swats it down. If you beat the hands, you beat the man! #passrush #hulabowl #nfldraft pic.twitter.com/rrs0iJNTYU