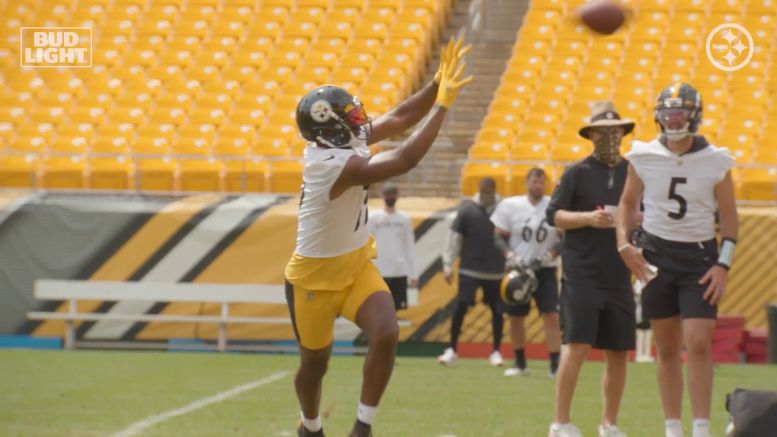 JuJu Smith-Schuster is back with a brand new contract in Pittsburgh. And hopefully he’ll return with a much healthier knee. In an offseason roundup written by ESPN’s Jeremy Fowler, he noted Smith-Schuster’s knee injury was worse than perhaps we were led to believe. And some theorize it impacted his free agency market.

Here’s part of what Fowler had to write:

“In 2019, Smith-Schuster missed four games with a knee injury and concussion. He missed several practices last season with the knee injury designation, and sources say he’s received frequent treatment for knee-related issues, which makes them wonder about his long-term durability going forward.”

Smith-Schuster was a regular on the team’s injury report a year ago. He bounced on and off the report throughout the year, including a late add to the injury report leading up to the Wild Card loss to Cleveland. To his credit, he didn’t miss a single game, regular season or postseason. But there have been moments where injuries have clearly bothered him, especially in that forgettable 2019 season that saw him put up career-low numbers across the board.

Fowler’s report notes Kim Miale, Smith-Schuster’s agent, says no teams during free agency were concerned about the health of his knee, including the Steelers. The fact two other teams offered contracts, the Ravens and Chiefs, both of whom offered more money, speaks to that lack of concern. Fowler also writes Smith-Schuster has been training in Los Angeles the last several weeks, a sign he’s feeling healthy heading into the offseason. And he has his youth. It’s easier to get past knee injuries at 24 than 34.

You could make the argument though his knee problems hindered his on-field impact and could be one reason why the Steelers were so intent on running a tight end route tree for him instead of getting him work downfield. Clearly, the injuries hurt his 2019 numbers and maybe capped a bit of his 2020 production. That led to a softer market and him accepting a one-year offer with the Steelers. He’ll hope for good health and better production to cash in next offseason when the cap is expected to jump by a significant amount.