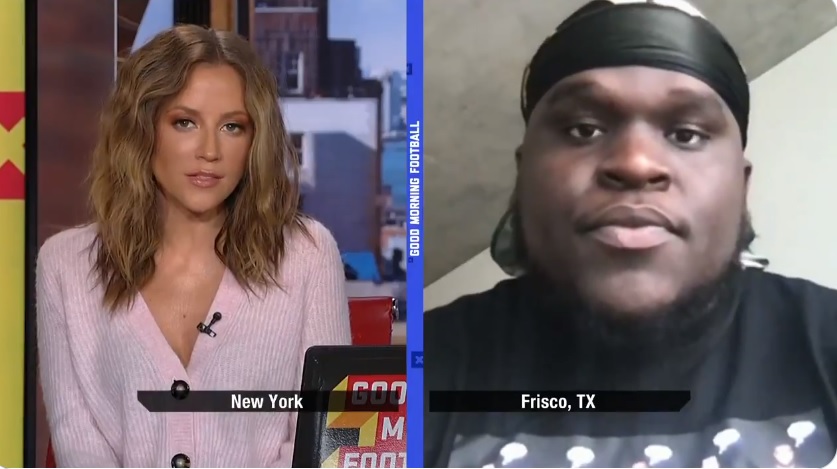 Kevin Dotson’s toughest matchup in his rookie season was probably a guy who wore the same colors as he did. Stephon Tuitt. That was the dude Dotson was tasked to block each day in practice. Facing Tuitt daily made gameday a whole lot easier. Dotson explained the benefit in an appearance on NFL Network’s Good Morning Football Wednesday morning.

“Me being on the right side, mostly this year, I went against Stephon Tuitt probably the entire year,” Dotson told the show. “And I guarantee he was a determining factor for me in my buildup as an NFL guard.  People that I was going against during the game, if they weren’t on that same intensity that he was on, then I knew the game wasn’t going to be as hard.  Practices are harder to me cause I’m going to get the dudes every day. And Stephon Tuitt, he’s going to a hundred percent. So I have to bring my all every practice.”

All that practice paid off. Dotson had a heck of a rookie year and responded when the team needed him early in the season. With David DeCastro missing the start of the year and Stefen Wisniewski tearing his pec, Dotson was a starter by Week 2. He would go on to make three more starts on the season, seeing time at both guard spots. He flashed as a run block, though the o-line struggled as a whole, and was very impressive in pass protection.

We’ll have a full video recap of his rookie season in the coming weeks, just as we did with fellow rookie Alex Highsmith today.

He’s expected to enter his sophomore season as the full-time starter at left guard with Matt Feiler set to become a free agent. Should Feiler be re-signed, the team is likely to move him back out to right tackle where he started 15 games in 2019.

With Dotson at left guard, he’ll get rewarded by facing Cam Heyward every day in practice. I imagine the “practices are harder than games” statement will remain true even after this season.

"It was a good confidence boost for me. It carried me through the season. It made me feel like I belong in the NFL."@steelers G @kdd7696 joined #GMFB to talk about receiving the game ball from Big Ben after his first NFL start, being drafted to his favorite team, and much more! pic.twitter.com/0fCDhzGiPX