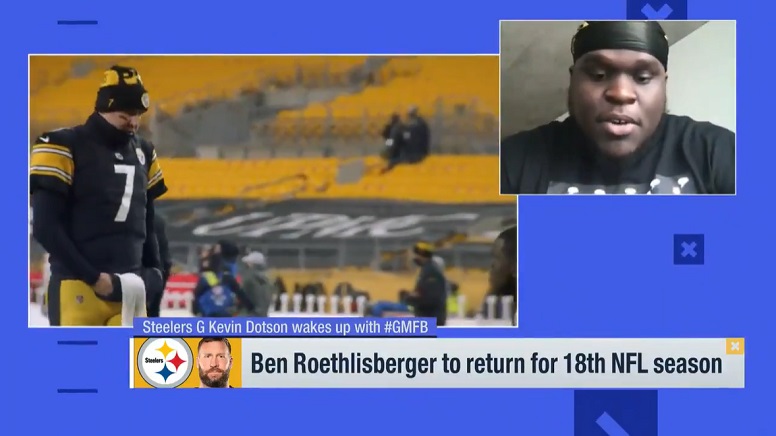 Pittsburgh Steelers guard Kevin Dotson had a fine 2020 rookie season as the team’s fourth-round draft pick out Louisiana-Lafayette played extremely well when given an opportunity to show what he could do. Dotson’s rookie season also included him playing with veteran quarterback Ben Roethlisberger. With one season now in the books playing with Roethlisberger, Dotson was asked Wednesday during his interview on Good Morning Football on the NFL Network if he has anything he would like to say to someone who might say that the Steelers veteran quarterback doesn’t have enough left in the tank to not just get the team to the playoffs in 2021, but to win a Super Bowl as well.

“I don’t know what to tell them,” Dotson said. “If y’all don’t believe that he can do it, I can’t tell you anything. So, you know, Ben has everything he needs. He’s the smartest guy I’ve seen on the team. He’s the biggest leader on the team. He has full control of the team. So, I feel like he has everything he needs to get us there. You know, we just fell short this [past] year. I feel like he was doing his job this year. So, I mean, I don’t know what can sway someone’s opinion now.”

Dotson’s response was great and not too much at all, In fact, he’s answer to the question makes it sound like he’s been in the NFL for six years already. You can tell he has the utmost respect for Roethlisberger and that he honestly believes the Steelers veteran quarterback has what takes to lead the 2021 team to a championship.

After playing just a little more than 350 offensive snaps in his rookie season, Dotson is expected to be the Steelers starring left guard in 2021. He, along with the rest of the members of the Steelers starting offensive line, will be tasked with the jobs of not only protecting Roethlisberger like he’s been protected the last several seasons, but more importantly, help revive the running game that ranked last in the NFL in 2020.

Dotson, as many know by now, grew up a big Steelers fan and the same goes for his father. On Wednesday, he was asked to comment again on what the feeling like was for him to get drafted by his favorite team almost one full year ago.

“Man, it was a dream just because, like, the amount of people that I was talking to and the people that were calling me often,” Dotson said. “The Steelers only talked to me once and like, that was my dream team to go to, but I felt like they kind of wasn’t interested in me. But then like once I got drafted, I was like, it probably took me a good week or two before I truly just like, I’m about to be in the Steelers. Like, I’m really about to be on the team.”

Dotson continued on that topic and talked about how big of a Steelers fan his father is and how he is handling it now after one full season.

“And my dad, he’d been a Steelers fan his entire life,” Dotson said. “So, right now, he still can’t believe it. So, he comes to the game and he’s just like, he’ll tell me after the game, ‘like my son is really on the Steelers.’ He loves to definitely brag about it as much as he can.”

I have a feeling that Dotson is going to make his father and Roethlisberger even happier in 2021.