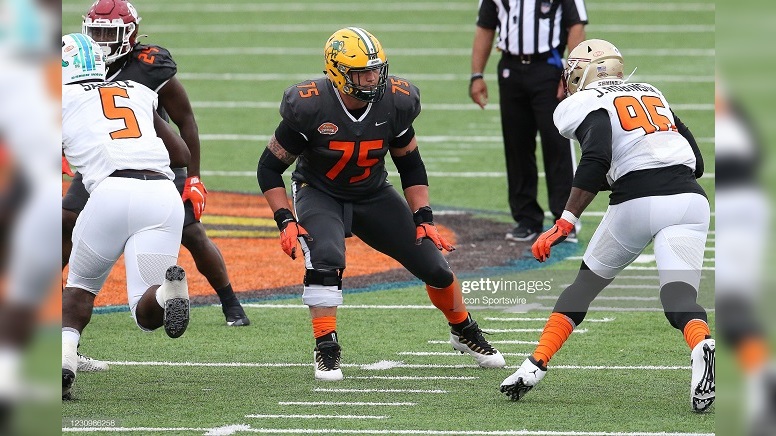 If you like mock drafts with a twist, you will likely want to read the one that Cynthia Frelund of the NFL Network released on Tuesday as it is analytics-driven and designed with the goal to maximize each team’s potential to win as many games as possible in 2021. Make sure to read her forward of her mock draft 1.0 if you follow the link to it.

So, who did Frelund mock to the Pittsburgh Steelers at no. 24 overall? North Dakota State tackle Dillon Radunz and below is her reasoning behind that selection.

One of my favorite things to measure is how far back O-linemen get pushed — or don’t get pushed, rather — by the defensive players trying to pressure their QB. Radunz’s results place him in the top 12 percent amongst tackles over the 15-season sample. It’s necessary to factor in the level of competition, but this is still the kind of result that usually equates to a career of 10-plus years.

At the senior Bowl, Radunz measured in at 6055, 304-pounds with an 80 1/4-inch wingspan, 33 1/4-inch arms and 9 1/8-inch hands. He made his 32nd consecutive and final start at left tackle for North Dakota State in the Oct. 3 season-opener against Central Arkansas. It was the only game he would play in this season due to the season being cut short by the pandemic.

Below is what Pro Football Focus has on Radunz in their annual draft guide.

Radunz tore his ACL early in his redshirt freshman campaign in 2017. He started every game for the Bison since then, with 24 career pressures allowed on 715 pass-blocking snaps. Radunz is undersized at his listed 299 pounds, and it’s worrisome that it already showed up on tape against FCS competition. He doesn’t have a naturally large frame and arrived at North Dakota State at only 265 pounds. If he can continue to fill out, Radunz has shown the explosiveness and agility to be a starting-caliber NFL tackle.

PFF also has quite a few good things to say about Radunz after the Senior Bowl week was over with.

Dillon Radunz played his way into the 1st RD conversation in Mobile 💪 pic.twitter.com/mEeN1bCoZi

Here’s another thing about Radunz. It looks like he could jump inside to guard and function effectively there as well. He was asked to do that some during the week of the Senior Bowl.

Dillon Radunz was solid this week – at both OT and OG

Our very own Tom Mead did a great profile on Radunz for Tuesday morning and you can read it by following the link below. The young offensive lineman really grows on you and his play makes it easy to look past him coming from a smaller school. I bet the Steelers have some level of interest in Radunz, who more than likely will be drafted somewhere in the second or third round.