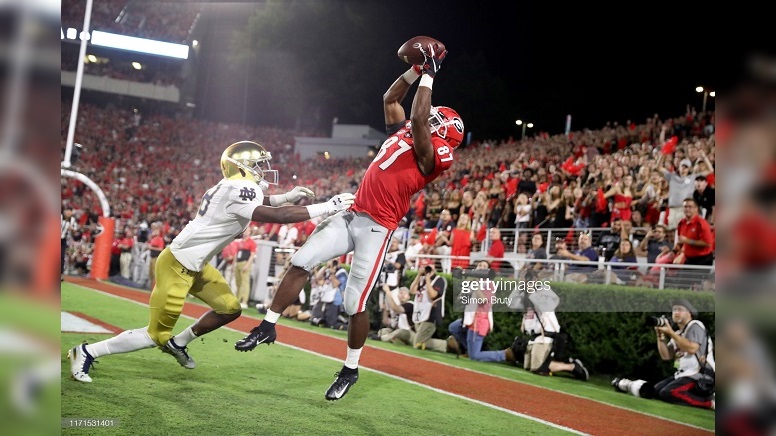 The Pittsburgh Steelers signed free agent wide receiver Tyler Simmons on Monday and now the Georgia product and former undrafted player of the Houston Texans will compete for a roster spot throughout the summer. In his final season at Georgia in 2019, Simmons caught 21 passes for 255 yards and a touchdown in the 10 games that he saw targets in. After finding all 10 of those 10 games, I was able to contextualize all 33 targets Simmons had in them and below is that data that’s also complete with links to the video of every play.

Simmons’ average depth of target on the 33 total targets in these ten games from 2019 was 11.0 yards and his average completed distance from the line of scrimmage was just 7.95 yards. It’s worth pointing out that just three of Simmons’ 21 total contextualized receptions from 2019 were caught more than 15 yards down the field.

On the 21 total contextualized receptions from the ten 2019 games of Simmons’ that I charted, the wide receiver registered an average of 4.2 yards after the catch.

Four of Simmons’ 21 total receptions in these ten games came in the middle if the field and thus between the hash marks. He averaged 10.5 yards per reception on those four middle-of-the-field catches. 11 of his 21 receptions came outside the numbers.

Simmons has fairly reliable hands but I did observe three drops in these 33 total 2019 targets from the ten games I contextualized. One of those is disputable and it came in the end zone against Notre Dame.

So, what is the one biggest positive that sticks out in these 2019 targets that Simmons had at Georgia? I would say body control and his ability to make nice back shoulder catches outside the numbers and near the sidelines. One of his three drops in these 33 total targets was a brutal one, however, and it came deep down the middle of the field early in the game against LSU.

You don’t see a huge route tree from Simmons in these 33 total targets and he is certainly not a burner or a twitchy player. For his entire college career at Georgia, Simmons had just three receiving touchdowns and three receptions resulting in gains of 25 yards or longer. He just 35 total receptions at Georgia and 21 one of them are below.

Overall, and based on Simmons 2019 Georgia tape, it’s hard to see what exactly made him so attractive to the Steelers. He did return nine punts at Georgia during the 2019 season and was included in 12 total running plays, but that’s it. His 12 runs totaled 89 yards and his nine punt returns resulted in 143 yards.