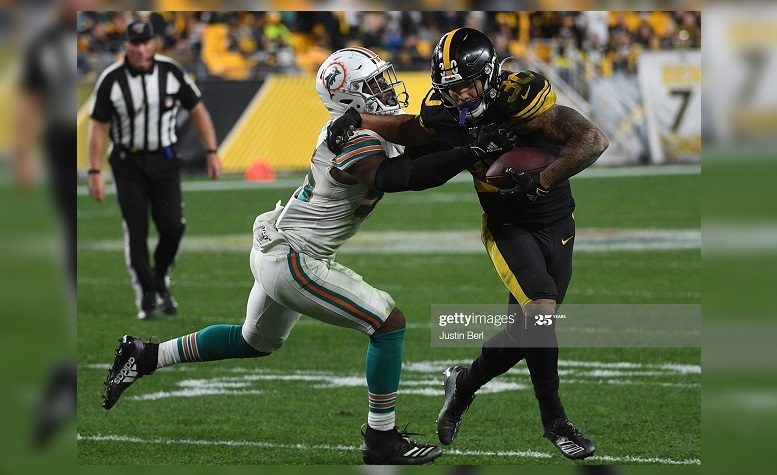 Pittsburgh Steelers running back James Conner is set to become an unrestricted free agent in a week and assuming that happens, he’ll almost surely be gone and thus will sign with another team at some point. While Conner won’t be the cream of the crop in this year’s group of free agent running backs, there is bound to be a team or two interested in signing him for more than the minimum. According to John Clayton during his weekly interview on 93.7 The Fan, the Miami Dolphins could potentially be a landing spot for Conner in the coming week or weeks.

So, assuming Conner does latch on elsewhere in free agency, will he get starter’s money? Clayton doesn’t think so.

“No, it’s going to be hard even for the starters to get starter’s money in free agency,” Clayton said. “You know, one of the things I’m looking at is that they didn’t put franchise tag at $8.5 million in Green Bay on Aaron Jones so that kind of tells me that he is going to get some kind of a deal at $10 million-plus, because of rumblings are out there that they’ve had that kind of an offer. But here’s where the problem is, no other back is going to get more than $8 [million]. Melvin Gordon was the highest paid running back free agent last year, and I’m not talking about re-signs and he got two years at $16 [million]. So, all of these guys are going to come in under $8 [million].”

Clayton was asked if he thinks some teams might value Conner a little more because of the offensive line that he had to play behind during his last few seasons in Pittsburgh.

“Well, not the cancer or anything like that, but I think they also look at the injury history and everything else,” Clayton said in response to the question. “And then the problem that he faces is that there’s so many backs from the 2017 draft that are available, that even though he’s been to the Pro Bowl, they’ve been to the Pro Bowl, too. I know that Marlon Mack is available. Chris Carson is available. Now you have Aaron Jones. There was like 10 or 11 backs who are really good from that [class].”

“And of course, you throw that into the mix with backs that are being cut, backs that are available from other drafts and even undrafted players, so, yeah, it’s going to be a tough market. And again, I think the, particularly in a year like this, teams aren’t going to go three, four years on running backs. They’re going to go one or two, realizing if you put big money into running backs – you saw a big Joe Mixon not do hardly anything last year because of injuries. And then you saw Le’Veon Bell and that didn’t work out for the Jets. And so, the big deals for the running backs are going to be on hold for two years.”

There have been estimates this offseason that Conner will find a team willing to pay him $6 million or more in free agency and it will now be interesting to see if he gets that kind of money or just half of that as Clayton suggested. After all, the market should be fairly flooded with running backs by the time March 17 rolls around.