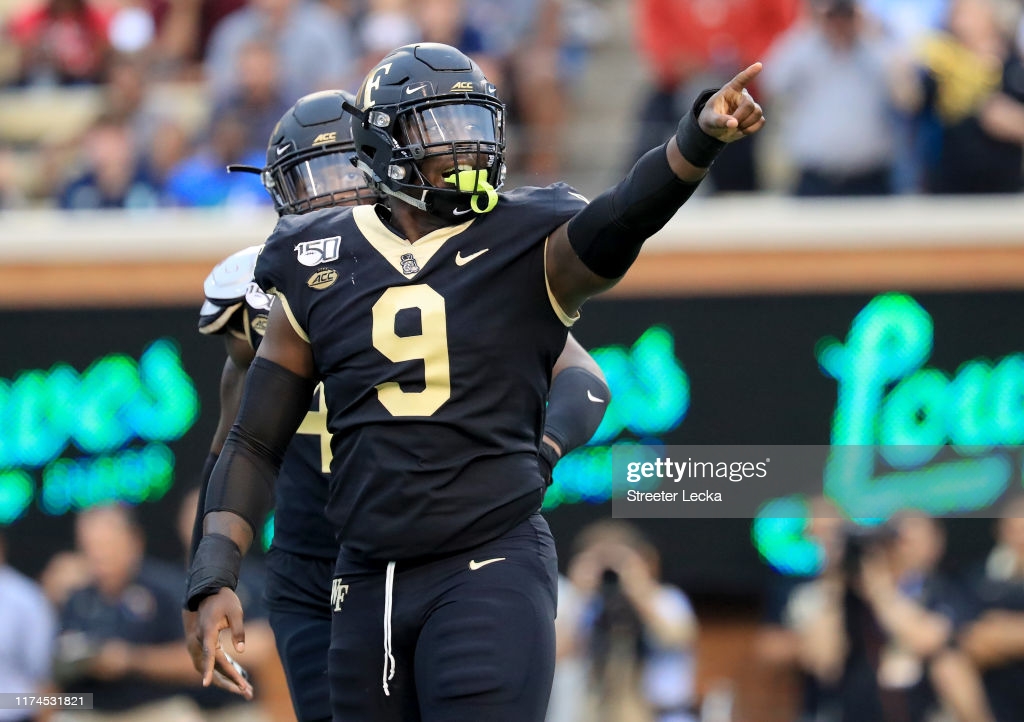 Most mock drafts have the Pittsburgh Steelers focused on taking an offensive linemen or running back at #24. Some get a little more adventurous and mock on athletic, off-ball linebacker like Zaven Collins. But in his seven round mock draft, CBS’ Chris Trapasso has Pittsburgh going in a different, curious direction.

At #24, he has the team taking Wake Forest DL/EDGE Carlos Basham. In his quick write-up of the pick, he explains:

“Basham is a big, freaky disruptor who’ll fit right in with the Steelers defensive front.”

At 285 pounds, Basham is a bit of a tweener for the Steelers’ scheme. But even if you accept the team could make him fit, the need to take a guy like him is debatable. Even if he were to play more of a stand-up EDGE role, the Steelers won’t address the position so early in the draft. It’s nice seeing new names in these mock drafts and kudos to Trapasso for completing the daunting task of a seven round mock but Basham is a tough sell.

Things get better in Round 2 with the Steelers selecting Clemson OT/OG Jackson Carman.

“Carman is a mountain of a man with above-average athletic traits given his size, and the Steelers have to add young pieces to the offensive line.”

Carman makes the most sense if he can stick at tackle, the position he played with the Tigers. However, he measured in with just 32 1/2 inch arms at his Pro Day, suggesting a move to guard. If that’s the case, guard is the one area of the offensive line where the Steelers don’t need a starter. Mike Tomlin and Kevin Colbert attended his Pro Day last week.

Steelers stick with the Clemson route in Round Three, choosing WR Amari Rodgers.

“Rodgers is a stocky wideout who crushes it after the catch because of insane contact balance.”

Rogers would be a strong replacement for JuJu Smith-Schuster in the slot and we’ve included him in our past mock drafts. This is arguably Trapasso’s best pick for Pittsburgh so far.

With their initial fourth selection, the Steelers address the secondary with Minnesota CB Benjamin St-Juste.

“St-Juste is way more athletic than he should be at around 6-3.”

St-Juste reportedly had a “great meeting” with the Steelers at the Senior Bowl. Pittsburgh’s gravitated towards having big, physical outside cornerbacks. St-Juste would fit the Steelers’ man-heavy scheme well and provide a look to the future with Joe Haden and Steven Nelson currently in the final year of their contracts.

“Williams is a freaky athlete with nice hand work. He just needs to get a little stronger to thrive in the NFL.”

Williams is one guy we’ve yet to profile on the site. Listed at 6’4, 278, he has ten sacks across his sophomore and junior seasons before choosing to declare early. With Basham already taken, adding another defensive linemen here doesn’t make as much sense. Especially without, say, running back being addressed.

In Round Six, he has the team taking Missouri S Joshua Bledsoe. In ten games for the Tigers last year, he had 41 tackles and his first college interception. Safety depth could be upgraded with Sean Davis slated to hit free agency. Jordan Dangerfield is also a free agent but odds are good he returns on a minimum-level contract.

*Finally* in round seven, Pittsburgh drafts a running back, taking Louisiana’s Elijah Mitchell.

“Mitchell was the big-play threat in Louisiana’s backfield.”

Mitchell exited his Rajun Cajuns career with over 3200 yards rushing and 41 touchdowns. As a senior in 2020, he averaged over six yards per carry with eight rushing scores. Pittsburgh no doubt saw him when scouting Kevin Dotson last season. But Mitchell comes with high miles, 527 carries, and it’s almost unthinkable the team waits until the 7th round to draft a running back unless they make a big move in free agency.

Howard is listed at 6’4, 275. In six games for the Raiders, he racked up three tackles for loss and 2.5 sacks. He does appear to be much older than a typical prospect. A 2015 high school grad, he committed to North Texas before transferring and sitting out the 2016 season. It’s not 100% clear what his age is but he has to be in his mid-20s at this point. Not a great late round flier.

Overall, bit of a weird draft for the Steelers. Staring at the top with the Basham selection. Rodgers is definitely the best pick here. The rest leave a lot to be desired. But kudos to Trapasso for embarking on this seven round marathon. Again, if you want to read the entire thing, click here.