Alex Highsmith is going to have a ton on his to-do list now that he’s not a wide-eyed rookie just trying to figure out the playbook. But to be fair to him, Highsmith never really felt like a rookie. Smart and mature, he turned that into a solid 2020 season. And now he’s the Steelers’ starting ROLB, he has his sights set on getting even better.

“Getting stronger and faster this offseason,” Highsmith told the show. “And working on more moves. You can never have enough tools in your tool box. But I think the main thing for me is perfecting my favorite moves. My couple of outside moves and a couple of countermoves. And if I could perfect those, those are the ones I’m going to be able to go to.”

Highsmith showed the an unusually varied pass rush repertoire as a rookie. He had the ability to throw almost any move at an offensive tackle. Whether that was a straight speed rush to win the corner, the cross chop, his ghost rush while countering with inside spins and speed-to-power bull rushes, his hand use and pass rush arsenals were impressive.

But we noted the same issue in our recent seasonal review of Highsmith’s game. Having a lot of moves is a good thing. But perfecting one or two of them is even better. Here’s what we listed in the negative category of that breakdown. The last point was “identifying 1 or 2 “Go-To” Moves. 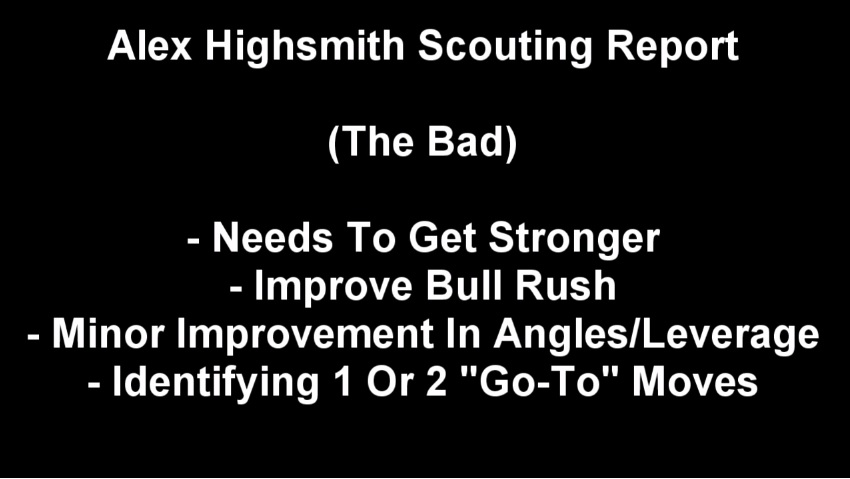 Here’s what I said in the video:

“When I think about Alex Highsmith, I don’t know what the key pass rush move is right now. He’s got a lot of energy, a lot of tools in that toolbelt. But when the game is on the line, what is going to be the move that he knows he can go to and that he can win with?”

So it sounds like Highsmith agrees with that assessment. Plenty of top pass rushers have had just a couple moves. James Harrison won with just two of them: dip/rip to the outside and when tackles overset, he used his speed bull rush. Dwight Freeney won with an outside speed rush and then used a devastating inside spin to counter. Sometimes, having too many pass rush moves muddies up your own plan. And trying to work on everything often means you master nothing.

Highsmith’s maturity and football IQ is allowing him to reflect and find ways to improve even after a strong rookie campaign. He’s the type of guy who will keep improving and undoubtedly maximize his talent. That doesn’t guarantee he’ll be an elite player, but it means the Steelers are going to have a good player opposite TJ Watt.