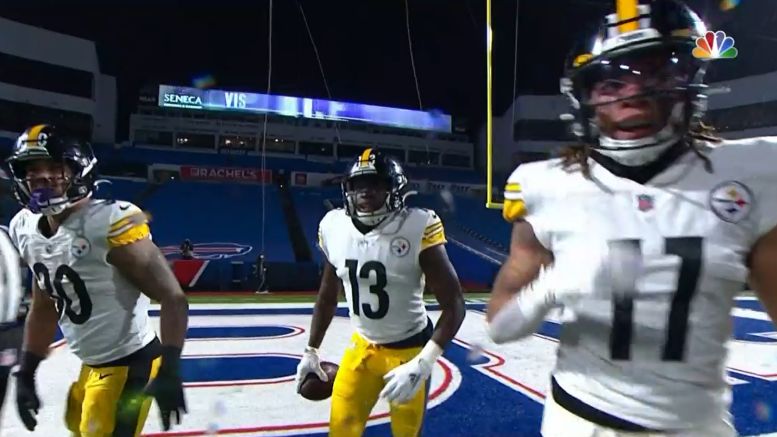 Reasoning: While his role was reduced in 2020 with the emergence of rookie Chase Claypool, Washington still made plays when called upon, and he could return to a more prominent role next season is the Steelers do not retain JuJu Smith-Schuster.

The numbers are not remarkable, by any means. Just 30 receptions, with which he produced 392 yards. He did have five touchdowns, which represents a new career-high, and is in fact more than he had in his first two seasons combined. The issue with James Washington became primarily a matter of finding time on the field.

A former second-round draft choice in 2018, he went from 634 offensive snaps over 15 games in 2019—a year in which he led the Steelers in receiving yards—down to 486 snaps in 16 games, with his snap count dropping off precipitously after the first five games.

That was due to the rapid emergence of rookie wide receiver Chase Claypool, who was making plays from the word go, including the game-sealing play in the opener and then a season-long 84-yard touchdown a week after that.

Injuries to Diontae Johnson over the ensuing weeks helped to keep Washington active, but when the wide receiver group got healthy, it was the third-year man out of Oklahoma State who lost out, even seeing Ray-Ray McCloud take some snaps over him in a four-receiver set.

From week five on, he would record just one game with either three or more receptions or more than 30 yards. His 80-yard outing in the late-season loss to Washington came on just two receptions, one of which was a 50-yard catch-and-run score, the first a 30-yard snag on a rare deep connection.

The only real avenue to increased playing time for the man entering the final year of his rookie contract would be if the Steelers do not re-sign JuJu Smith-Schuster, a reasonable proposition given that he figures to make $15 million per season or more on the open market. In such an event, Washington would re-emerge among the top three receivers along with Claypool and Diontae Johnson. And then we’ll see what he can do at this stage of his maturity. Unless he gets passed over by another rookie, which admittedly would be a good problem to have.