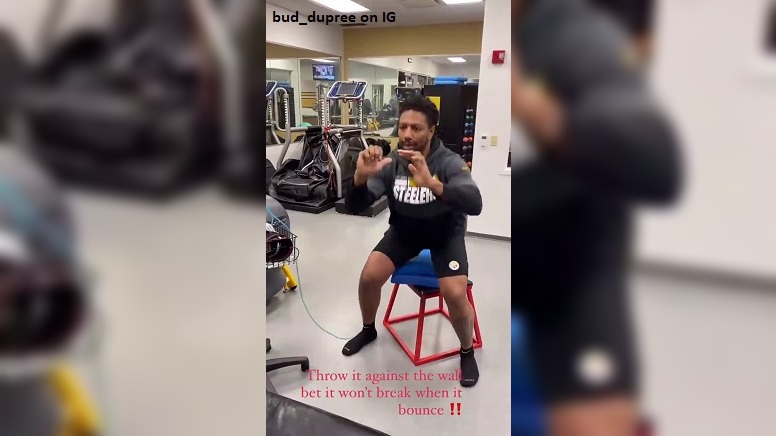 With the 2020 NFL season officially coming to an end Sunday night with Super Bowl LV, the next important date on the league’s calendar is the official start of the 2021 year on March 17. That date marks the start of free agency and thus a lot of fans of the Pittsburgh Steelers will be watching closely to see what happens with the team’s long list of players scheduled to become free agents. A headliner of the Steelers’ long list of players set to become unrestricted free agents in March is outside linebacker Bud Dupree, who is currently rehabbing the season-ending knee injury he suffered in early December. On Monday, Dupree posted a few videos on Instagram of the progress he’s made so far in his injury rehab.

As you can see in the two videos below, Dupree has now graduated to doing deep knee bends and that’s certainly fantastic to see and especially with the 2020 season officially just coming to an end Sunday night. Assuming he remains on course with his rehab, one of the few questions regarding him at this point would seem to be if the Steelers former first-round draft pick out of Kentucky will be fully ready for the start of the 2021 regular season.

The other key question regarding Dupree at this early stage of the offseason is if he’ll be re-signed by the Steelers. On the surface, it would appear as though the Steelers won’t be able to afford to re-sign Dupree prior to the start of the new league year in March due to their salary cap situation and even if the outside linebacker were to be willing to sign for one-year for less than $10 million.

If the Steelers can’t re-sign Dupree at the start of free agency, will there be another team willing to ink him prior to the end of the prime signing period and thus take him on as a compensatory draft pick value on their debit sheet? We’ll see.

Is it totally out of the question that Dupree won’t be back with the Steelers in 2021? It probably depends on his asking price and how long he’s willing to sign for. It would also likely depend heavily on if the Steelers would be willing to guarantee more than just Dupree’s 2021 earnings, something the team doesn’t have a history of doing with non-quarterbacks.

Not too long ago, NFL insider John Clayton estimated that Dupree would likely need to settle this offseason for a one-year prove it deal for around $6 million and the Steelers outside linebacker quickly scoffed at that notion on social media. Because of that, one could easily surmise that Dupree wouldn’t be willing to sign for less than $10 million a season and maybe even more than that on a one-year deal.

The Steelers seemingly currently have 2020 third-round draft pick outside linebacker Alex Highsmith waiting in the wings to take over for Dupree fulltime in 2021. While it would be great if the team found a way to bring Dupree back for at least one more season, the odds of that happening are seemingly very long as we sit here a little more than five weeks out from the start of free agency.

At the very least, take comfort in knowing that Dupree’s rehab seems to be going as good as it possibly can. Barring any setbacks, Dupree will be back playing again in 2021 for some team and that’s great news.

Part two of the latest on Bud Dupree and his knee rehab per IG #Steelers pic.twitter.com/BQe8A9sH3E