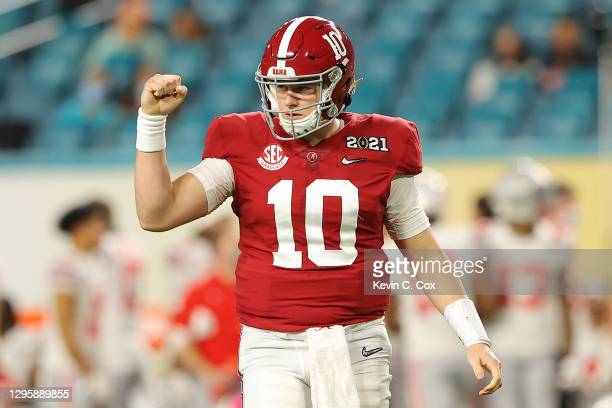 How do you find your next franchise quarterback? Very aggressively, that’s how. And that’s the mentality the Pittsburgh Steelers’ front office must take until they find an heir to fill Ben Roethlisberger’s Hall of Fame-sized shoes.

In past years, I’ve been squarely in the camp against drafting a QB early. Build around Roethlisberger, maximize the chances of winning with him than sacrificing the present for the future. That was the case I laid out.

2021 is different. The odds are strong this upcoming season will be Roethlisberger’s last. Which should put every member of that front office on high alert. The Roethlisberger era is just about over. Pittsburgh is about to enter a brave new world.

Don’t misunderstand what I’m saying. The Steelers may not walk away from this Aprils’ draft with their next franchise quarterback. Picking at #24 isn’t exactly prime real estate for that kind of guy. This isn’t a mandate to take a quarterback. It’s a mandate to act like the building’s on fire. And the only solution is to scout and attempt to draft one.

In an ideal world, the Steelers do take a QB early in this draft. He sits for a season behind Roethlisberger. Big Ben then retires, Mason Rudolph hits free agency, or re-signs as a cheap veteran insurance policy, and the rookie is the favorite to start in 2022.

If Pittsburgh waits, it’ll feel like an obligation to take a QB in 2022. Roethlisberger retires, Rudolph walks, Dwayne Haskins is…who knows. There are other avenues like finding a bridge QB in free agency, but the mission will still be acquiring a long-term option. The best organizations have the foresight to attack problems before they’re staring you in the fact like it will be if Roethlisberger’s retired and there’s no one waiting in the wings.

Cross out the top QBs in this year’s draft: Trevor Lawrence, Zach Wilson, Justin Fields. Pittsburgh has no shot at those guys. From there, it’s game on. Trey Lance, Mac Jones, and Kyle Trask. The Steelers have to treat each of those guys like they could be the guy and scout them as such. Maybe they determine one, two, or all three of those guys aren’t the answer. Then you find another plan. But if one of those guys get graded like a franchise quarterback, the Steelers have to be aggressive. That means definitely taking him if he falls to you at #24. And that means, at the least, exploring a trade-up. Pulling it off is unpredictable and there are limits to everything. But if you trade up and find the league’s next great quarterback, you won’t regret any of the assets you gave up. It was worth it.

Life after Terry Bradshaw sucked. The 80s were a mess. Yes, there were whiffs on drafting QBs. Mark Malone and Bubby Brister were envisioned as saviors. Instead, they were the butt of the joke. The risk of the draft is that there aren’t any guarantees. But the only way to turn the tide is to select one. Eventually, you find a Roethlisberger and your franchise runs a whole lot smoother for the next decade.

Aggressively exploring a QB in this draft doesn’t mean punting on 2021. It’s just recognizing reality. The Steelers’ odds of making a Super Bowl run next season have greatly diminished. And Pittsburgh must prepare itself for the inevitable. Because they won’t be legitimate contenders again until they’ve found Roethlisberger’s replacement. There’s no better time to start that process than the present.