The Pittsburgh Steelers now have a little less than five weeks remaining to get salary cap compliant and with center Maurkice Pouncey announcing on Friday that he is retiring, the team was able to clear some cap space. On the heels of Pouncey retiring on Friday, Saturday is a great day to update the team’s current salary cap situation and especially with a lot of bad misinformation now floating around on other blogs that attempt to cover the team.

The biggest unknown as we sit here almost four weeks out from the start of the 2021 league year on March 17 is what the salary cap number will be for all 32 teams. After months of speculation that the 2021 number might be the bargained low floor amount of $175 million, most industry insiders I know and talk to and follow believe the league-wide number will come in at $185 million or higher. Because of that, I am going to start the dangerous assumption that the low-water amount for the 2021 NFL salary cap number will be $185 million until I have a reason to lower it or raise it.

While not official due to their two recently retired players this offseason in Pouncey and tight end Vance McDonald not yet being placed on the Reserve/Retired list, the Steelers now have 53 players under contract for 2021. The team also has $4,950,555 in leftover salary cap space from 2020 that they will be rolling over to 2021. The Steelers Rule of 51 right now is approximately $194,486,760 and their dead money amount, which includes the Pouncey and McDonald amounts, sits at $9,565,459. 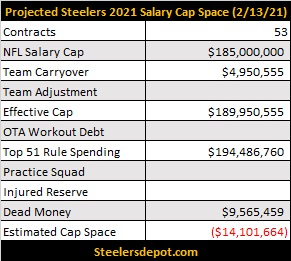 Let the record show that I now have Chukwuma Okorafor listed as his Proven Performance Escalator salary amount as well. We might as well begin accounting for that higher amount now even though it looks like the NFLPA still isn’t.

We are now working off the assumption that the Steelers are essentially right now $14,101,664 over a cap number of $185 million. And as I wrote in several previous posts on the Steelers 2021 salary cap situation, doing full contract restructures on defensive linemen Cameron Heyward and Stephon Tuitt in the next four weeks would result in $11,031,250 in salary cap savings. In short, and assuming the NFL cap number comes in at $185 million or more, the Steelers won’t have a lot of work to do to get compliant with the league-wide number.

Shaving $14.34 million off Roethlisberger’s 2021 cap number, should that be the course the two sides take in the next four weeks, should obviously put the team well under a salary cap number of $185 million. The team could also decide to an extend a contract or two on players such as guard David DeCastro and cornerback Steven Nelson to clear even more smaller chunks of 2021 salary cap space. A contract termination or two might also wind up happening in the next four weeks and leading the list of candidates for that would be inside linebacker Vince Williams, should the team decide to part ways with a player or two to clear cap space for 2021.

To close out this 2021 salary cap update on the Steelers, keep in mind that the first goal for the team is to get compliant to the league-wide number by March 17 while also accommodating any tenders given to restricted and/or exclusive rights free agents in the next few weeks. Additionally, the Steelers will need to be able to accommodate any of their soon-to-be unrestricted free agents they wish to re-sign before March 17 as well.

Getting salary cap compliant for the Steelers is just half the battle for the team. Remember, the Steelers will still need salary cap space to accommodate their draft class and undrafted free agent displacement costs, a full practice squad, a 52nd and 53rd player on the roster, in addition to having around $10 million in available space come Week 1 to have for in-season moves. In short, the Steelers will have a lot of cap-related work to get down after March 17 arrives. Keep rooting for the league-wide cap number to come in higher than $185 million. 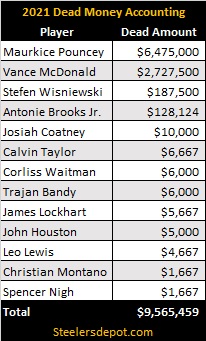