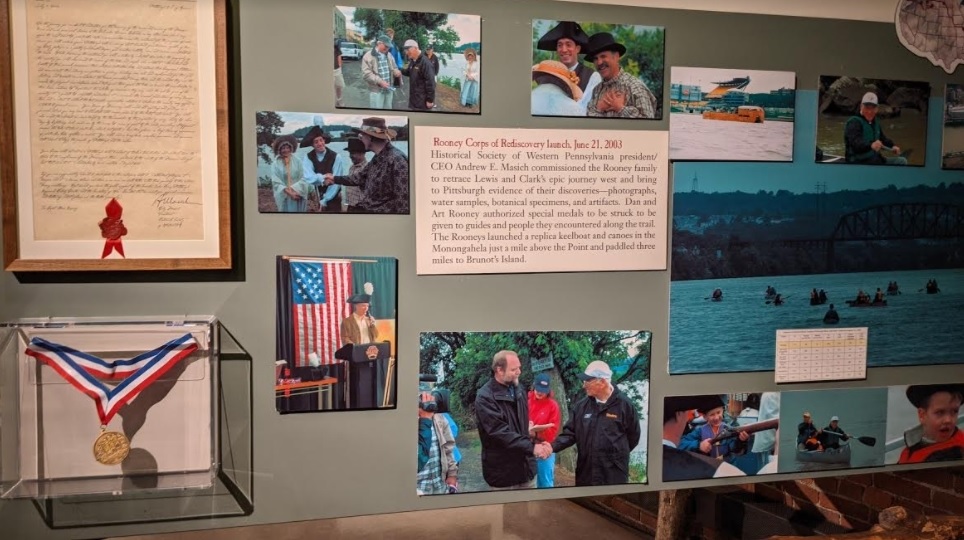 Steelers Depot creator Dave Bryan flew to Pittsburgh this past week. Dave got together with Alex Kozora to plan improvements of the Steelers Depot website and the Terrible Podcast in the coming year. It was a special treat for me to spend a few days with Dave and Alex.

We drove to Canton, Ohio to visit the Pro Football Hall of Fame Thursday morning. It was Dave’s very first visit to the Hall.

Currently, there is an exhibit displaying a private football card collection. Some of the cards date back to the 1890’s for featuring players from Yale, Harvard, Princeton and other college powers of that era. The collection goes right into modern times and we picked out different Steelers players through the decades.

We continued into a wing that covered the history of professional football including the receipt showing the first documented professional game played between the Allegheny Athletic Association and the Pittsburgh Athletic Club. Pudge Heffelfinger, a Yale graduate, became the first professional football player. The Pittsburgh Athletic Club offered him $250 which Pudge turned down. Allegheny doubled the offer to $500 (over $14,000 in today’s dollars). He earned the pay by scoring the only points in the game.

We saw a lot of great football memorabilia including items associated with the Pittsburgh Steelers like Kevin Greene’s gloves and Dermontti Dawson’s helmet. We suffered through a film on the road to the Super Bowl that featured the Kansas City Chiefs and San Francisco 49ers. Soon, the film will be updated to show Tampa Bay and Kansas City. That, of course, triggered a conversation on whether the Steelers have underperformed over the decade that has passed since they last appeared in a Super Bowl.

Finally, we ambled through admiring the busts of every single Hall of Fame inductee. The substantial number of persons associated with the Steelers is impressive. The Steelers are well-represented in the Hall of Fame. The Steelers founder, Art Rooney and son Dan. Coaches Walt Kiesling and Chuck Noll. Premerger player Ernie Stautner and all the greats from the 1970’s dynasty. The display for the 2020 inductees is set up but just missing the busts. Coach Bill Cowher, safeties Donnie Shell and Troy Polamalu are in this class. The shelving for the 2021 class is not installed yet but Alan Faneca and Bill Nunn will join the rest of the Steelers gang adorning the Hall this summer.

We spent a long time on the two floors filled with western Pennsylvania sports history. The Steelers, Pittsburgh Penguins and Pirates had large sections. But there were many more sports and history covered like boxing, car racing, the Homestead Grays.

We visited the Strip District and ate some delicious burgers at Café Raymond’s. We finished our day in Pittsburgh with a quick visit to Heinz Field and drove by UPMC Rooney Sports Complex. Matthew Marczi just wrote about Mike Tomlin and some staff sent home due to the COVID protocols the other day.

I’m an average Steelers fan and it was a special treat to share some time and listen in on Dave and Alex discussing Steelers football in person. I’m sure they will describe Dave’s visit to Pittsburgh on the next Terrible Podcast. Be sure to listen in.

I like to include a music selection. We had a wonderful time revisiting past Steelers history at the Hall of Fame and Western Pennsylvania Sports Museum. Here is Living in the Past by Jethro Tull.