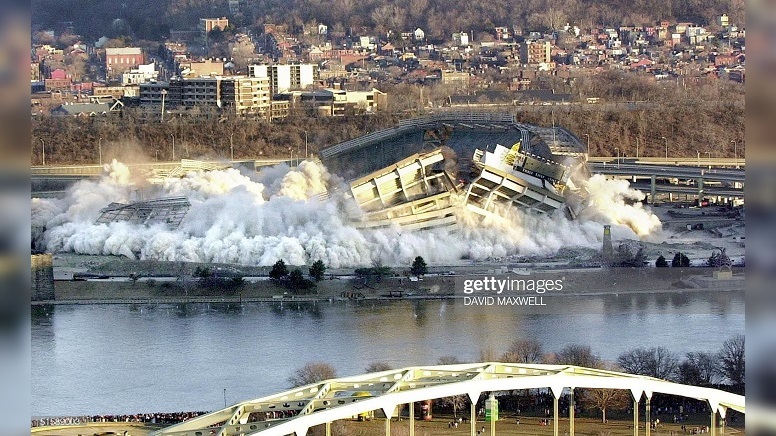 While it seems just like yesterday to some of us that Three Rivers Stadium was imploded on the North Shore of Pittsburgh, today actually marks the 20th anniversary of the event.

20 years ago today on February 11, 2001, Three Rivers Stadium was imploded on the North Shore in Pittsburgh #Steelers #Pirates pic.twitter.com/icsr7cJoBK

Officially opening on July 16, 1970, when the Pittsburgh Pirates lost to the Cincinnati Reds 3-2, Three Rivers Stadium went on to serve as the home venue for the Pirates as well as the Pittsburgh Steelers. The last game at the stadium was on Dec. 16, 2000, with the Steelers beating Washington 24-3.

Three Rivers Stadium was also the site of what many still regard as the best all-time play in the NFL, “The Immaculate Reception,” that took place on Dec. 23, 1972. On that play, the Steelers trailed the Oakland Raiders 7–6 and the offense was facing fourth down on their own 40-yard line with 22 seconds remaining in the contest and no time outs. Steelers quarterback Terry Bradshaw dropped back after the snap and almost immediately faced pressure. He then proceeded to throw the football in the direction of halfback John “Frenchy” Fuqua, who collided with Raiders safety Jack Tatum just as the ball arrived.

The collision between the two players knocked Fuqua to the ground and sent the football sailing backward several yards. Steelers running back Franco Harris, who was initially blocking at the snap, managed to catch the deflected football coming toward him just before it hit the ground and then ran the rest of the way for a touchdown. That score gave the Steelers a 13-7 lead after kicker Roy Gerela’s extra point with five seconds remaining on the clock and it resulted in the franchise’s first playoff win. The “Immaculate Reception” was recently voted as the Greatest Moment in NFL History on Feb. 2, 2020.

Pirates great Roberto Clemente also registered his 3,000th and final hit at Three Rivers Stadium during its existence. Several concerts and other sporting events were hosted at Pittsburgh’s “cookie-cutter” stadium, that had a seating capacity of 59,000 for football.

The “Immaculate Reception” was announced as the winner of the Greatest Moment in NFL History! #Steelers pic.twitter.com/RMAAV9U03a