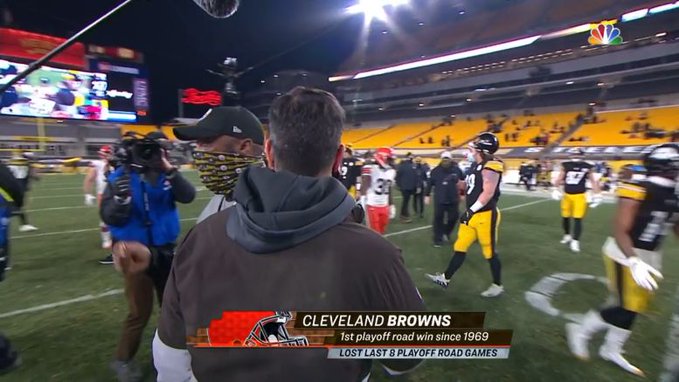 While the Pittsburgh Steelers might not have accomplished much in the postseason over the course of the past decade in terms of their own, tangible organizational success, they have been a part of some historic playoff games—generally for the wrong reasons.

You can go all the way back to 2011. The Steelers went 12-4 that year, but so did the Baltimore Ravens, and they owned the tiebreaker. So Pittsburgh went in as a wildcard and played Tim Tebow and the Denver Broncos at home. That was the first postseason game in NFL history to be decided under the new overtime rules in which a team must score a touchdown on their opening drive to end the game. Tebow did that. History. It’s in the Hall of Fame.

Their most recent postseason failure also produced memorabilia for Canton. Not only did they succumb to the largest first-quarter deficit in a playoff game ever, falling behind 28-0, they became the first team in NFL history to lose to a team with somebody serving as an active head coach in place of their actual head coach.

Kevin Stefanski was required to miss the game after testing positive for Covid-19, so the Cleveland Browns had special teams coordinator Mike Priefer act as head coach for the game. His team pulled out the victory for him, 48-37, doing so on the road, and for the franchise’s first playoff win since 1994.

History. It’s in the Hall of Fame.

Priefer’s game-worn jacket, gloves, and headset, that is. Those items are being sent to Canton to be immortalized to commemorate the so-far unique event, in one of the most unique seasons in the history of the NFL, due to the pandemic.

Okay, so Pittsburgh is sending no fewer than five members of their organization into the Pro Football Hall of Fame later this year, as part of the past two classes. That’s a little better than a headset and gloves.

Safety Troy Polamalu was a first-ballot Hall of Famer for the class of 2020, and safety Donnie Shell and head coach Bill Cowher both made it as part of the 100th-anniversary ‘Centennial Slate’. For the 2021 class, guard Alan Faneca and super scout Bill Nunn were selected for enshrinement.

Pittsburgh certainly has about as good a history as any fan base could hope for. But they’re also hoping for a little more out of their future, as well, and these little trinkets from their most recent failure serve as yet another reminder of seemingly how far they still have to go.