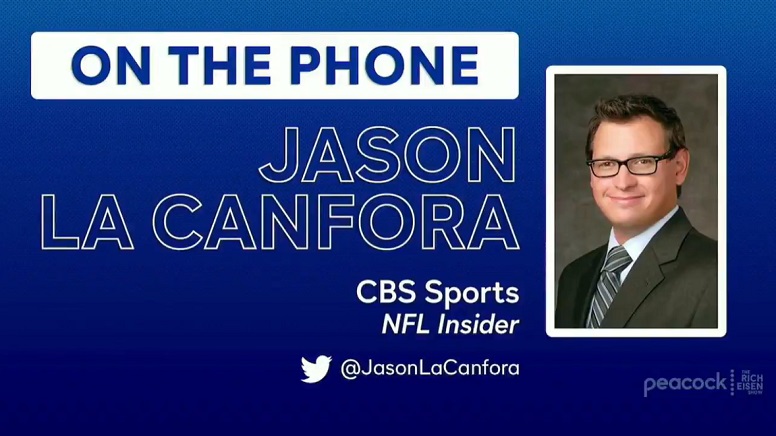 Now that most of the speculation about whether or not the Pittsburgh Steelers will bring quarterback Ben Roethlisberger back for the 2021 season is over with, it is now being replaced by speculation about what his contract will look like three weeks from now.

The most common and obvious speculation concerning Roethlisberger’s forthcoming contract adjustment revolves around the quarterback still getting the $19 million he’s scheduled to earn in 2021 with all but $1.075 million of it being given to him in the form of a signing bonus as part of an extension of two to four years. Jason La Canfora of CBS Sports, however, has a different speculation concerning upcoming adjustments to Roethlisberger’s contract.

“Well, I don’t think it’s $19 million next year or we wouldn’t be having multiple press conferences and zoom meetings and statements coming out every 12 to 24 hours,” La Canfora said Wednesday on The Rich Eisen Show. “And really, everyone’s kind of tapped danced around this, but the sort of awkward, messy, uncomfortable conversations haven’t taken place yet and I can see why neither party would want to dive in and entertain that process.”

So, is the reason neither party wants to dive in and entertain the process all about the total money amount for 2021? La Canfora thinks so.

“I think it’s clearly money,” La Canfora told Rich Eisen. “I mean, it’s absolutely money. It’s how much is guaranteed? It’s how much are you paid this year? It’s how much is rolled into incentives; likely to be earned or not likely to be earned? It’s sort of the ingredients of the sausage and how it gets made. If this was a simple, ‘we’re going to give you all your money and we’re going to give it to you up front now instead of you earning it over 17 paychecks’, or ‘we’re going to convert it to a bonus and add two voidable years’, there wouldn’t even be a conversation, it would just be a paper transaction that the Steelers could have executed at any point. If that were the endgame, we’re not talking about it in late February.”

Well, La Canfora is forgetting other several aspects that might need to be discussed with Roethlisberger and his agent and that’s things like possible voidable years, bonus pay out time schedules, a possible exit strategy in 2022 for Roethlisberger similar to that of New Orleans Saints quarterback Drew Brees this year. In short, the conversations Roethlisberger’s agent Ryan Tollner needs to have with the Steelers in the very near future will indeed be more than just about what the quarterback will earn in 2021. Even La Canfora should know that by now.

La Canfora, however, did not stop there with his comments about Roethlisberger and him likely to be asked by the Steelers to accept less than the $19 million he’s currently scheduled to earn in 2021. In fact, he kind of doubled down on his stance that Roethlisberger will get less than $19 million in 2021, or at the very least, have to earn some of that $19 million by hitting incentives.

“Their number might not be his number,” La Canfora told Eisen. “Like, what if their number is $12 [million] and his numbers $16 [million]. Clearly ownership doesn’t want to pay this guy $19 million. I don’t know how you could look at this scenario and say that that isn’t one obvious sort of takeaway from how this has played out. And the number’s probably fairly significantly below 19, or we still wouldn’t be playing this word game a month after the season. You know what I mean? Not really wanting to dive into the meat and potatoes but talking around it.

“Now, I don’t know what the number is. I’m not even sure if it’s been absolutely stated to the employees of the Steelers who will have to go about the negotiating of this compromise, but there is clearly some reservation about that level of compensation for this player, given what they saw in the second half of last year. And my suspicion as someone who’s covered a lot of these things is, again, if this was a million bucks or a couple of million bucks, I don’t think you and I are having this conversation trying to read tea leaves, I think it’s a done deal.”

La Canfora did, however, leave himself a tiny bit of backpedal room.

“Now, maybe they’ll get together with his representation and it’ll be done in an hour or a couple of hours,” La Canfora said. “It hasn’t happened yet, so I don’t know, but they have set this up to be something very different than all their previous, kick the can down the road, nothing to see here, we’re just converting future money into present day money and we’re changing it from base salary to roster bonus and signing bonus and we can just do it over the phone.”

Personally, I think La Canfora is going to be way off the mark here, but let’s suppose he is right, and that Roethlisberger will need to take way less than $19 million in 2021 as part of the agreement for him to return on an extension. How much would they really expect him to play for and what kind of extra cap savings in 2021 would a pay cut produce?

What if the Steelers got Roethlisberger to take just $15 million in 2021 instead of $19 million and obviously with no new money as part of a two-year extension like Gerry Dulac of the Pittsburgh Post-Gazette reported on Tuesday is what sources are telling him will be the case?

Now, would Roethlisberger potentially take even less than $15 million to play in 2021? Let’s just say I will be quite surprised if he takes less than the $19 million he’s scheduled to make and completely passed out if they were to get him to settle for $15 million.

We have at most three weeks remaining before we find out what Roethlisberger’s contract for 2021 will look like and I can’t wait to see it. If La Canfora winds up being right, it will be a huge win for him when it comes to something Steelers related. His last big Steelers-related win revolved around the news scoop that the Steelers might trade a first-round draft pick for safety Minkah Fitzpatrick. While I thought at the time that the Steelers should indeed look into acquiring Fitzpatrick, I certainly never believed they would get him by trading away a first-round selection. Let’s see how close La Canfora comes this time on his report about Roethlisberger’s contract.

It appears Big Ben will be back in Pittsburgh for 2021 but at what cost?@JasonLaCanfora helped us put more meat on the #HereWeGo bones:#NFL #NFLFreeAgency pic.twitter.com/GmLbl6G3Hh