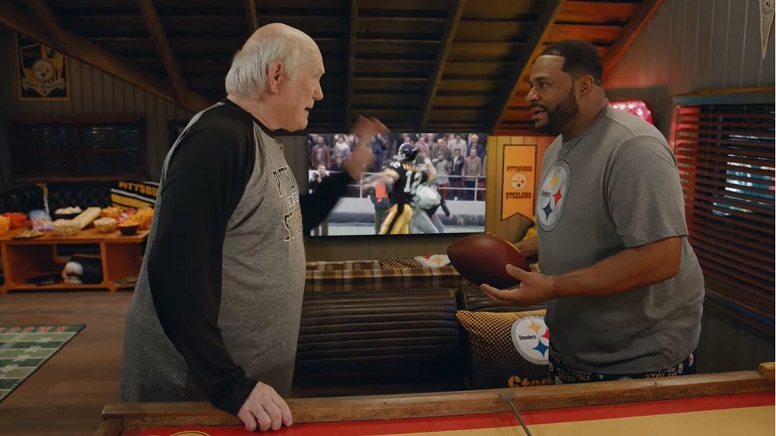 It’s Super Bowl week and that means on Sunday, and for all of this week for that matter, we’ll again be treated to several new commercials. Frito-Lay released their “Twas the Night Before Super Bowl” advertisement on YouTube on Monday afternoon and it features several former NFL players with two former Pittsburgh Steelers among them.

In the commercial, former Seattle Seahawks running back Marshawn Lynch narrates the famous Christmas poem, only with a football theme. It’s also a sequel to the beginning of the 2020 NFL season when Lynch narrated the “Twas the Night Before Kickoff” advertisement done by Frito-Lay.

In the part of the commercial that features Bradshaw and Bettis, the two former Steelers argue about the famous “The Immaculate Reception” play and why it’s named the way it is. Bradshaw tells Bettis he believes the famous Steelers play should be called “The Immaculate Pass.” Bettis, on the other hand, tells Bradshaw that the “pass was below the man’s (Franco Harris) ankle.” Bradshaw rebuttals by telling the Steelers Hall of Fame running back that it was an “easy catch” that running back Franco Harris made on that play. Bettis then informs the Steelers Hall of Fame quarterback that he couldn’t make that same kind of catch that Harris made and the two proceed to try to reenact the play, which concludes with the elder Bradshaw falling through a table that is covered with Frito-Lay snacks. Bettis then tells Bradshaw, “I told you it wasn’t that easy! I told you!”

You can watch the new Frito-Lay ‘Twas the Night Before Super Bowl’ commercial that includes Bradshaw doing his best Bills Mafia member imitation below.

On Monday, Bettis made the media rounds and that includes him being on Super Bowl Live on the NFL Network to discuss Frito-Lay and the ‘Twas the Night Before Super Bowl’ commercial.

“What makes this commercial so epic is that you’re going to have a lot of legends that’s going to be participating, but with these legends, they culminate into 22 Super Bowl rings between all of us,” Bettis said. “Then the storylines about the commercial is so great. For example, Eli Manning and Peyton Manning, you would want to know what goes on in that household, and then you have Archie Manning as well. Troy Aikman trying to get in with Jerry Rice and Joe Montana. Would that really happen?

“Then the one with myself and Terry Bradshaw really trying to show him how difficult the Immaculate Reception was on the other side being a receiver because he’s throwing it thinking, ‘Aww, he could catch that, that’s not a problem.’ So, just the commercial at a glance, it just talks about and does so many things that everybody would want to know about.”

"Opportunity of a lifetime."