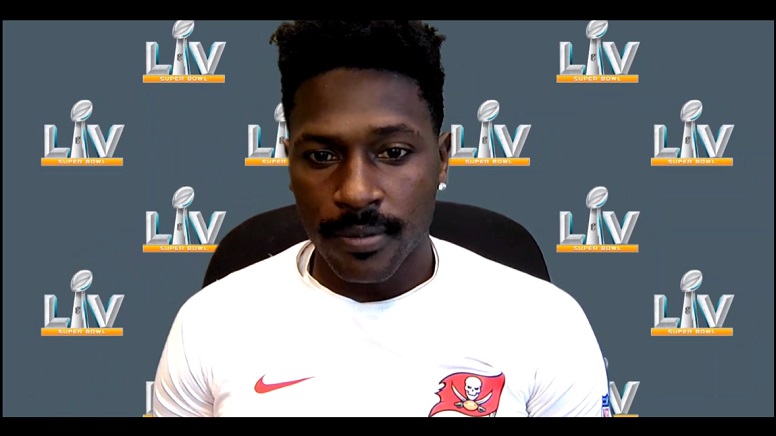 Super Bowl LV will take place on Sunday between the Kansas City Chiefs and the Tampa Bay Buccaneers and assuming knee injuries don’t prevent both from playing in the biggest NFL game of the season, two former members of the Pittsburgh Steelers, running back Le’Veon Bell and wide receiver Antonio Brown, will participate in that contest for their respective teams. On Tuesday, Bell met the media and during his session he was asked a few Steelers-related questions in addition to being asked about his former teammate Brown now playing for the Buccaneers. On Wednesday, it was Brown’s turn to meet the media and he was asked similar questions.

Right out of the chute on Wednesday, Brown was asked about he and Bell being in this year’s Super Bowl and what it means for him to be squaring off against his former Steelers teammate. He was also asked to reflect on the journey he and Bell have both made in their respective careers to get to this point.

“It’s been a blessing, man,” Brown said. “To see him [Bell] flourish and being it’s a moment, an opportunity, I know he doesn’t take it for granted. Just to see all the work that we put in, the things we persevered through to be in this position, I’m sure he’s grateful.”

Later during his long Wednesday media session, Brown was asked if he keeps in touch with any of his past Steelers teammates and if he still has any sort of relationship with head coach Mike Tomlin.

“Yeah, I keep in touch with a couple of teammates,” Brown said. “I definitely still talk to Mike. T., always a leader for me, always was there for me and continue on the journey in being in touch.”

Brown obviously talked some on Wednesday about how the Buccaneers have been very welcoming of him since he signed with Tampa Bay in late October after serving an eight-game suspension to start the 2020 season for because of a violation of the NFL’s Personal Conduct Policy.

“These guys really have embraced me,” Brown said. “They didn’t let words on the street, or what they heard about me [affect them doing that]. They took me in. It’s been a tremendous honor to be here, to play with some great guys in the locker room. The coaching staff has embraced me and welcomed me with welcoming arms, and I’ll be forever grateful for these guys. And I really appreciate it for the opportunity, and I pay these guys back with my work ethic, my production and my leadership in regards to helping the young guys and everybody here.”

The fact that Brown has made back this far in his career after all he’s gone through since the end of the 2018 season is quite amazing. And with that, Brown was asked on Wednesday to rattle off some of the things he’s learned in the last two years and what all he’s changed in his life to get back to where he is now in his NFL career.

“Well, it’s all about controlling your emotions physically, mentally when you don’t feel good,” Brown said. “Not being a slingshot when others come at me. Learning how to control my attitude, not letting my emotions get the best of me even if I feel someone was wrong for doing what they did. You know, just being forgiving and just staying positive.”

With Super Bowl LV approaching quickly, it will now be interesting to see if both Brown and Bell wind up being deemed healthy enough to play in the big game. After all, not only did both former Steelers players miss their respective team’s Conference Championship games with knee injuries, but both were also listed as limited practice participants on Wednesday’s Super Bowl LV injury report. Brown did not shed too much light on Wednesday on his current health status when asked to do so.

“Well, I was at practice today going over the details,” Brown said. “I continue with the arrow pointed up as the week continues to unfold.”