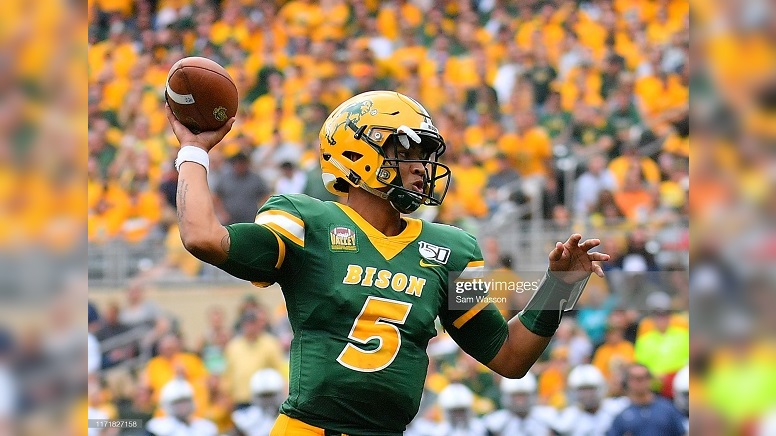 What is the most daring mover that the Pittsburgh Steelers could possibly make this offseason? Football Outsiders believe they know the best answer to that question and involves the Steelers trading up in the first round of the 2021 NFL Draft to select a quarterback.

In a recent article for ESPN, the Football Outsiders staff composed a list of Daring Moves for all 32 teams in the NFL and Robert Weintraub has the Steelers down for trading up in the first round of the 2021 NFL Draft to select North Dakota state quarterback Trey Lance. Below is Weintraub’s reasoning for listing a trade up for Lance as the most daring move the Steelers could make this offseason.

Yes, restructuring Ben Roethlisberger’s contract to spread out his terrifying cap hit over voidable years, thus allowing the team to improve its roster, would be a more realistic bold move. But that’s boring.

So let’s give Pittsburgh the jolt it needs for the future at the most important position in the game. The Steelers historically have been loathe to trade premium draft capital, but that changed when Minkah Fitzpatrick and Devin Bush were available.

Lance is highly unlikely to still be there at No. 24, when Pittsburgh is slated to pick in the first round, so they will have to invest some top picks to get in position to take the fleet and powerful, if inexperienced, North Dakota State quarterback. Next year’s first-rounder and a third from either this year or next is likely the minimum cost, depending on how high up they need to go; if there is a quarterback run and Pittsburgh needs to jump into the top 10 to get him, another premium selection will be required.

Still, it’s worth the cost, as 2021 could be a retrenchment season in the Steel City anyway. Now is the time to get a young passer into the Matt Canada system and have him ready to run, not crawl or walk, in 2022. Pay up, Pittsburgh!

That certainly would be a daring move by the Steelers and even more daring than the team extending Roethlisberger’s contract to free up salary cap space. What would it take for the Steelers to move up 14 or so spots in the first-round of the 2021 NFL Draft to select Lance? It’s hard to say for sure but there already have been mock draft this offseason that suggest it would cost the Steelers their first-round selections in 2021 and 2022 and their second-round selection in 2021 to move up 14 spots via a trade with the Dallas Cowboys.

Lance figures to be a slam-dunk to be drafted before the Steelers pick at 24th overall. He could be the third or fourth quarterback drafted this year and if so, odds are good he will be off the board by pick 20 at the latest.

In his 19 college games played at North Dakota State, Lance completed 208 of his 318 total pass attempts for 2,947 yards with 39 touchdowns and one interception. Lance also rushed 192 times for 1,325 yards and 18 touchdowns during his college career.

Lance was only a starter for one full season in college and that was in 2019. He only played in one game 2020 due to North Dakota State cutting short their season due to COVID-19. In that one game, Lance threw two touchdown passes and ran for two more scores and three-time FCS defending champion North Dakota State rallied with a 21-point fourth quarter to beat Central Arkansas 39-28.

The last time the Steelers moved up in the first round of a draft was in 2019 when they traded up ten spots with the Denver Broncos from 20th overall to select inside linebacker Devin Bush. The Steelers acquired the 10th pick from the Broncos in exchange for their 2019 first- and second-round picks (Nos. 20 and 52) and a 2020 third-round pick.

For whatever it’s worth, former NFL general manager Charley Casserly, who is now with the NFL Network, has the Steelers selecting Lance 24th overall in the first round of the 2021 NFL Draft in his first mock draft of the offseason.