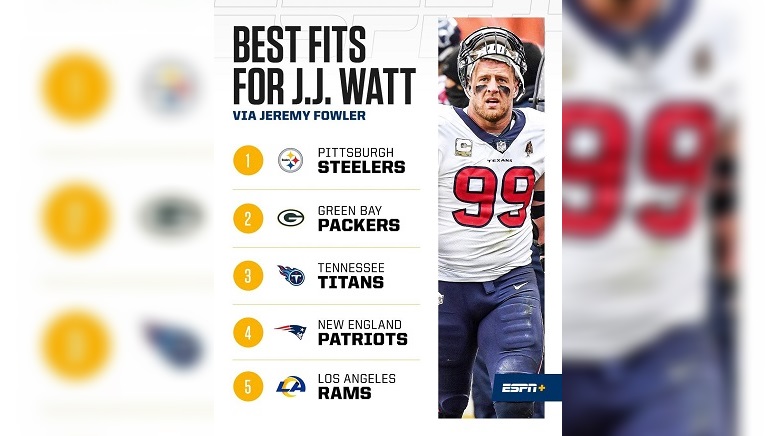 Where will free agent defensive end J.J. Watt ultimately land now that he’s been released from the Houston Texans? Nobody knows for sure, but the soon-to-be 32-year-old Watt shouldn’t have to wait long to find his next team. In fact, odds are probably good he’ll sign with a new team well before the start of the 2021 league year on March 17. Where does Watt best fit? Jeremey Fowler of ESPN has now listed several teams he thinks Watt best fits with in 2021 and he has the team he used to cover daily, the Pittsburgh Steelers, ranked first overall on it.

Below is what Fowler wrote for his reason for having the Steelers as the best fit for Watt.

The Watt brothers have discussed playing together, and with T.J. and Derek already under contract in Pittsburgh, the draw is obvious. Pittsburgh could pair J.J. with Cam Heyward and Stephon Tuitt on a vicious three-man defensive line, with T.J. rushing off the edge.

The problem is money. Watt would assuredly have to take something close to a veteran minimum, which players of his caliber are rarely asked to do. The Steelers have a $27 million cap deficit and several big-money veterans. Pittsburgh, however, can move money around to make this work if it really wants him — and if he wants to play with his brothers.

I mean nobody is surprised by that, right? After all, with brothers T.J. Watt and Derek Watt already on the Steelers, why wouldn’t Fowler list them as the top and best fit? The Steelers, however, are still knee-deep in a salary cap mess with four weeks to go before the start of the new league year and so unless Watt is willing to play for the minimum amount of $1.075 million or sign a long-term deal that keeps his 2021 salary cap charge extremely low, it’s really hard to imagine him reuniting with his younger brothers in Pittsburgh.

Rounding out Fowlers best fits for Watt and in order are the Green Bay Packers, Tennessee Titans, New England Patriots, and Los Angeles Rams. Fowler then has the Buffalo Bills and Baltimore Ravens as his sleeper teams. I find it interesting that the Cleveland Browns didn’t get mention from Fowler as they have the money to sign Watt and certainly could have him serve in a rotational role.

So, when will Watt get busy to listening to offers from the reported numerous teams that already have interest in him, of which the Steelers are one? Fowler said on Friday that Watt wants to take the weekend off before digging into potential new team options and that once he does begin the process, signing with a contender will be important to him as well.