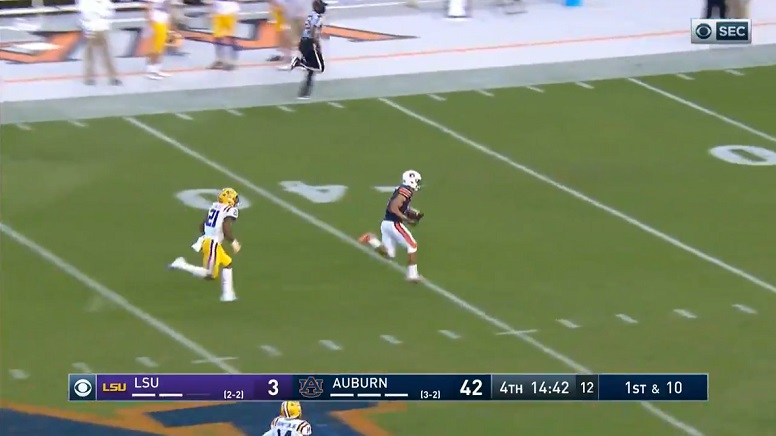 The Pittsburgh Steelers reportedly have some sort of level of interest in Auburn wide receiver Anthony Schwartz way ahead of the 2021 NFL Draft so with that news circulation on Sunday, it’s probably a great time to contextualize some of his play from the 2020 season.

For his college career at Auburn, Schwartz caught 117 passes for 1,433 yards and 6 touchdowns over the course of the last three seasons. For the 2020 season, Schwartz caught 54 passes for 636 yards and 3 touchdowns. For the purpose of this contextualization post, I watched seven of his 2020 games against Georgia, South Carolina, LSU, Tennessee, Alabama, Texas A&M and Mississippi State and charted all his targets. That play-by-play data of those 54 total targets is below.

In total in the seven games that I watched from last season, Schwartz had 33 receptions for 459 yards and two touchdowns. While Schwartz did register a healthy average intended air yard distance of 9.20 yards on those 54 total targets, his average air yard completion distance was just 3.55 yards, which was very disappointing to see. Only seven of those 33 receptions came more than 10 yards past the line of scrimmage and 19 of them came behind the line of scrimmage.

While Schwartz did registers 342 yards after the catch on his 33 receptions, I charted from the 2020 season, an average of 10.4 yards per grab, 46 of those yards came on a deep pass touchdown against LSU and against a blown coverage. His other touchdown reception I charted from the 2020 season, a 54-yard scoring catch and run against Tennessee, also came as a result of a blown coverage down the field.

While Schwartz seems to have reliable hands as a whole, he did have two drops in 54 targets from last season that I watched. His route running and tree also isn’t all that refined from the tape that I watched. He mostly functioned as a slot or backside X receiver last season and once again, most of his pass targets, 34 in total out of 54, came 8 or less yards from the line of a scrimmage.

Overall, I found Schwartz’s 2020 tape to be pedestrian. While he certainly does have some speed on tape, he did not register very manty vertical receptions in the seven games from 2020 that I watched. I noticed he was used quite a bit in pre snap motions as well as the wide receiver screen game and quick outs and slants. That’s about it. While I need to watch some of Schwartz’s 2018 and 2019 tape, I don’t get the sense that he warrants being drafted ahead of day-three.