The #66 is the last thing Willie Parker saw before breaking into daylight on his 75 yard TD run during Super Bowl XL. That was the back of Alan Faneca’s jersey, pulling ahead to kick out and crush a Seattle Seahawk defender, the pivotal block to spring Fast Willie the rest of the way.

So why #66? Joining Steelers’ Nation Huddle, the newly Hall of Famer Faneca explained why that was the jersey he wore for almost all of his career.

“I got #66 in high school,” Faneca said. “My high school coach, my o-line coach gave it to me. He said, ‘this is your number. This is what’s going to be good for you.’ It was purposely given to me. He thought it looked good on me. So that’s how I got started with it. And then I stuck with it. I got to LSU with #66.”

That #66 must have carried good luck, paving the way to a great college career at LSU. He declared early as a junior and the Steelers took him 26th overall. According to reports at the time, Pittsburgh had every hope of drafting Faneca. But it wasn’t clear if he would fall that far.

Here’s what Ed Bouchette wrote for the Pittsburgh Post-Gazette the day of the ’98 draft.

“The Steelers will likely draft either guard Alan Faneca or defensive linemen Jeremy Staat when they make their choice with the 26th pick of the first round…they would prefer Faneca…but it appears the New York Giants, who pick two spots above them, might take him.”

The Giants didn’t select Faneca, instead drafting safety Shaun Williams at #24. Williams was a good safety who made 60 starts over eight years for the G-Men. But he was no Faneca.

And funny enough, the Steelers got both guys they targeted in Round One. After taking Faneca in the first, they moved up in Round Two to take Staat at #41. An odd fit in Pittsburgh’s system, he never panned out, making just two starts and recording 30 tackles in three years with the team.

Steelers’ fans with enough age and a sharp memory will recall Faneca didn’t begin his NFL career wearing his #66 jersey. He had to briefly wait for it.

“Some of you might remember I briefly wore #65 my very first year in Pittsburgh because veteran Jim Sweeney had it. I had to let Jim finish out with his #66. But the equipment guys knew if and when Jim retired I wanted to go back to #66.”

Faneca actually wore 65 his first two seasons in the league, 1998 and 1999, until Sweeney retired. Here’s a screenshot of Faneca sporting that #65 in their 1999 blowout win over the Cleveland Browns. 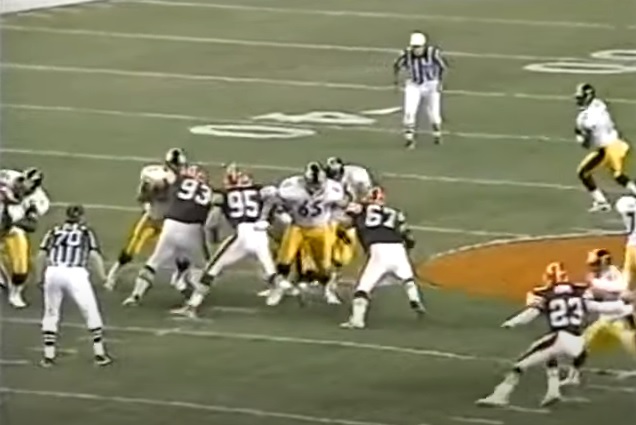 Faneca began wearing #66 for the 2000 season. And the rest is history. He carried that jersey to his time with New York Jets and Arizona Cardinals before hanging up his cleats in 2010.

Perhaps one day, we’ll be asking Hall of Famer David DeCastro why he wore #66, too.