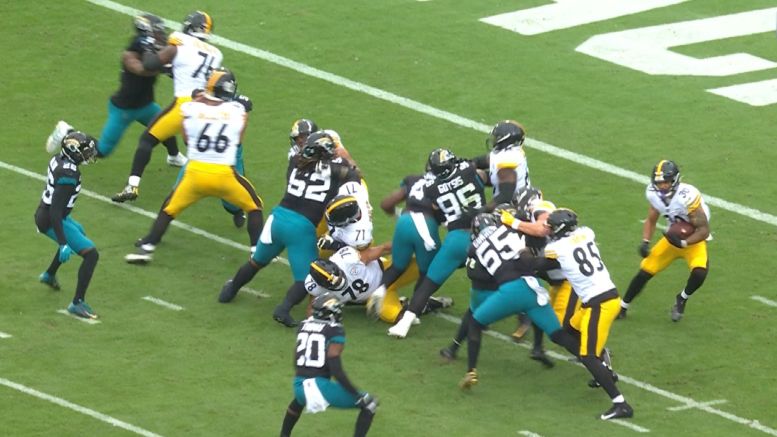 If the Pittsburgh Steelers win the Super Bowl, it’ll be because of their Hall of Fame quarterback and elite defense.

If the Pittsburgh Steelers don’t, it’ll be because they couldn’t run the football.

I don’t mean to make things that black and white but the lack of a Steelers’ running game is the elephant in the room heading into the postseason.

It’s not that the Steelers aren’t a great running team. I’d accept a good rushing attack. Even an average one. At this point, I’ll take a “hey, that one run was nice, wasn’t it?”

Since the first four games of the season, Pittsburgh’s had the worst rushing attack in the game. The numbers confirm it.

From the team’s fifth game on, Pittsburgh’s carried the ball 251 times for 796 yards (3.2 YPC) and eight touchdowns. The yards and yards per carry are easily the worst in football. Here’s how the bottom three rank in each category.

Pittsburgh isn’t just last. They’re in a league of terrible all on their own, looking at the taillights of the team ahead of them.

But running poorly as a macro, yards per carry stat doesn’t tell the whole story. My goal for the Steelers this playoff run is to be effective situationally. Goal to go, short-yardage, and end-of-game/four-minute offense. As we pointed out earlier in the year, Pittsburgh’s been among the league’s worst running the ball in short-yardage situations.

Even with Ben Roethlisberger back in 2020, no team failed as often running on 3rd and 4th and 1 as the Steelers. They converted just 55.6% of the time, 20 of 35 attempts, the worst mark in football. The league average was 70%. Pittsburgh’s nowhere close to that.

Mike Tomlin’s coaching creed is if you can’t get a yard, you don’t deserve to win the game. No team has been bad at getting a yard than the Steelers.

No one’s mistaking the identity of the offense. It runs through Ben Roethlisberger. He’s likely to throw the ball 35-40 times, maybe more, in every playoff game. The quick pass game will be their “run game alternative” aka the “we suck at running the ball so here’s a one-step slant to JuJu.”

But there’s going to come a point in time where the Steelers will have to run the ball. At least once. The idea of playing – and winning – four straight playoff games to win the Super Bowl without any semblance of a run game isn’t sustainable. Nor is it likely.

Take last year’s Super Bowl winning Kansas City Chiefs. Patrick Mahomes drove the offense. But they still ran it when they had to. On one drive In the big game against the San Francisco 49ers, they ran for two yards on 2nd and 1, five yards on 3rd and 2, and scored from one yard out on 2nd and goal. Three key conversions to either keep the drive alive or finish it off. Without Mahomes, they don’t get to the Super Bowl, much less win it.

But like Kansas City, there will be a time when the Steelers need a singular moment of a functioning running game. And I don’t know if they’re capable of doing it.