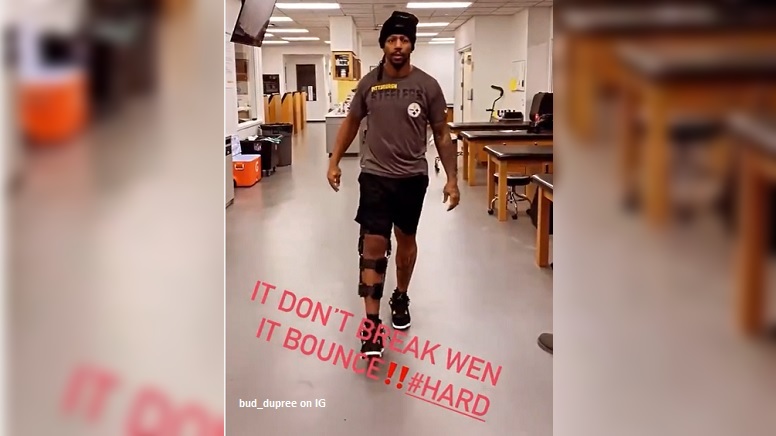 Here’s some good news for everyone on a Thursday. Pittsburgh Steelers outside linebacker Bud Dupree is back walking again following his early December knee surgery.

On Thursday, Dupree posted a video of himself walking with a knee brace on his Instagram account. Dupree previously had surgery to repair a torn ACL in his right knee in early December. He suffered that injury late in the Steelers Week 12 game against the Baltimore Ravens.

Dupree, who received the franchise tag from the Steelers this past season, registered 31 total tackles, eight tackles for loss, eight sacks, 15 quarterback hits, two defensed passes and two forced fumbles in the 608 defensive snaps that he played in before suffering his knee injury.

While Dupree is back walking again, he still has a long road ahead of him. The Steelers former first-round draft pick is scheduled to become an unrestricted free agent in March, long before his knee rehab is finished.

While not impossible, Dupree will be hard-pressed to be fully rehabbed from his knee surgery by the time the 2021 regular season begins. He’ll almost surely begin training camp on a team’s Active/PUP list. Will that team be the Steelers? Probably not.

Keep up the great rehab, Bud!

Steelers OLB Bud Dupree getting on with his rehab per IG post #Steelers pic.twitter.com/P0gnTEkr27