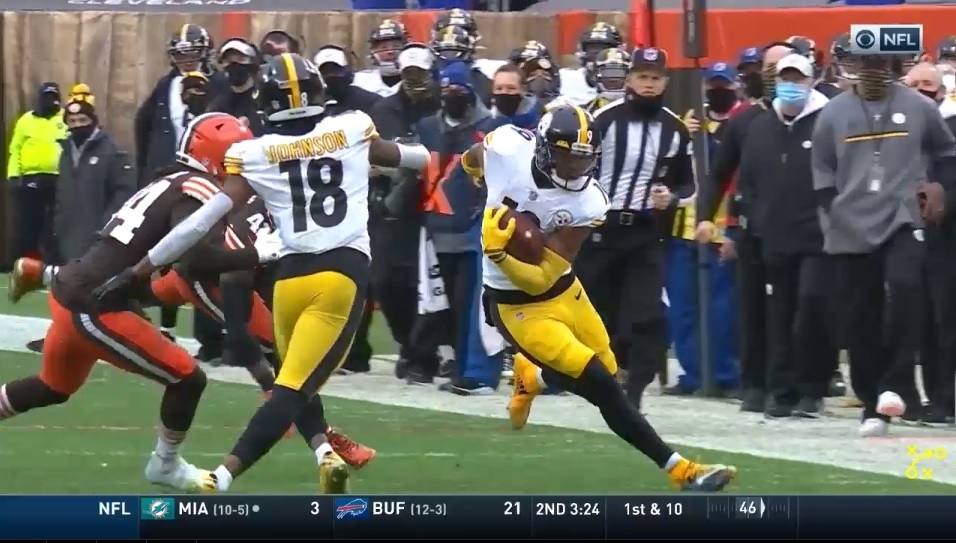 1. Redemption for Rudolph – After Mason Rudolph’s play last year I was looking forward to seeing what kind of progress he has made. Initial results were more of what we saw in 2019 but as the game began to progress the concerns I was having showed promise. Early on it seemed like he didn’t know the location of his check downs.  His pocket awareness was missing. The ball seemed a tad late on outside throws.  It may have started with the late drive in the first half where he started to process more quickly.  He knew where to dump it off, he showed enough pocket mobility to extend plays and his anticipation on throws was much better. His deep throws were on the money and he showed trust in his wide receivers to make a play. He did throw a ball up for grabs when pressure came that was intercepted but compared to last year you can see he has taken a step forward.

2. New Leader in the Clubhouse – Alex Highsmith looked like the best player out there when he was on the field. He made the first three tackles of the game finishing with a season high nine total tackles. He recorded his second sack and was able to get pressure despite facing off with a very good rookie left tackle and being chipped often.  He set the edge on runs his way and played well from the backside. For me, he played like a veteran today, like a leader, and will be a fixture on this defense in years to come.

3. Lost Luggage – Either it has happened to you or someone you know. You get off the plane, go to the baggage claim area and you’re left standing bag-less when the carousel stops. It hasn’t been confirmed but evidently the bag with the referee’s flags never made it to Cleveland.  They were able to pick up whistles at the local drug store in the toy section. There has been a concerted effort by the NFL this year to call fewer penalties but this game there were plenty of plays that could or should have been called.

4. Rader Love – My initial impression after this game is I want Kevin Rader on the playoff roster. I loved his aggressiveness as a blocker. There brought a physicality element in the early part of the game that has been missing in recent weeks.  He was also effective on special teams. I saw him make two tackles and he was credited with a third. The Steelers normally only carry two TE’s but if there is an opening to add a special teamer he gets my vote.

5. Fly, Fly, Fly – I think we can all agree that Ray-Ray McCloud has some ability. He has been referred to as the “gadget guy” of the offense. Not gadgets, gadget. Evidently all they can come up with for him to do is catch the ball behind the line of scrimmage.  He has twenty receptions on the year. Fifteen of those have been throws at or behind the line of scrimmage.  I believe about 7 or 8 of those are of the fly pass variety which he got two today. Maybe they’re saving the really creative stuff for the playoffs but it’s not hard to defend two types of plays when he gets the ball.

6. Half Way There – In recent games the Steeler have not handled opportunities at the end of the first half well. Against the Colts there was poor time management and no attempt at a Hail Mary. Against the Bengals they went three and out. Against Buffalo it was a pick six. Against Washington it was three and out. It was refreshing today to see the offense sustain a drive and put some points on the board late in the second quarter that included Rudolph going 4 of 5 for 54 yards with a third down conversion.

7. Showing Nothing – Like a magician at a child’s birthday party I’m willing to bet Keith Butler didn’t want to use his best material against the Browns. Based on the situation of this game with the playoffs pretty much set I think he probably played a vanilla defense. However watching Browns receivers being wide open in zones and watching linebackers cover wide receivers really gets my blood pressure up. I fully expect the David Blaine level mysteriousness in the defense next week.

8. Scramblin’ Man – Give credit to the Steelers coverage they did so well that Baker Mayfield was forced to scramble several times and was able to gain significant yardage. Yes, frustrating to watch when it happens against the Steelers defense but honestly it made me a little envious.   Ben Roethlisberger has never been a great scrambler with a high of 204 rushing yards in 2007 but has always been great at extending plays.  To have a quarterback who can make plays with his legs is something that has been missing in this offense for a long time and even seeing Josh Dobbs do it a little bit was fun to see.

9. Value Times Two – Clinching the playoff spot early gives you a chance to do things differently in week seventeen and the Steelers took full advantage. Being able to rest the veterans is important and could pay dividends next week. Also being able to play younger players and veterans who haven’t played a lot this season gets them needed reps that if called upon next week could give them and the coaching staff confidence.  There were several guys that caught my eye this week including Marcus Allen, Sean Davis, Jayrone Elliot, Justin Layne, Rudolph and Rader. Lots of value added in this loss.

10. King of the North – The AFC North is really one of the toughest division’s year in and year out. The Steelers were able to win the division that is putting 75% of their teams in the playoffs. Losing four of the last five is less than favorable and two weeks ago my answer would have been different but I feel pretty good about their chances.  The AFC is the tougher of the conferences and there will be some surprises in the playoffs.  Kansas City is the defending champs but their last seven wins are by 7 points or less. Buffalo is hot right now. Tennessee is all aboard the Henry Train.  Baltimore is peaking and Cleveland has been up and down the last 6 weeks but can be tough. I honestly wouldn’t be shocked to see any of the seven teams in the Super Bowl.  It’s going to be fun next week.