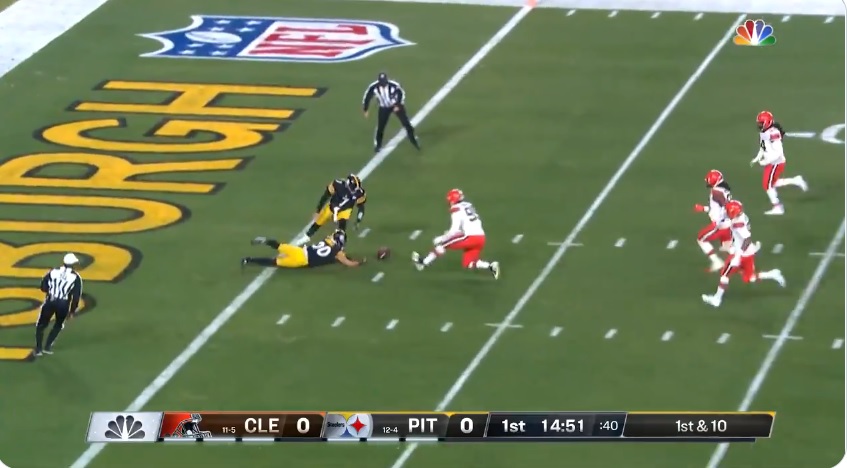 I’m sad. And I know you are too. And also pissed off and possibly a little intoxicated (you, not me). All perfectly acceptable.

Winners and losers from the Pittsburgh Steelers 48-37 loss to the Cleveland Browns.

James Pierre: Pierre was about the lone bright spot in the first half of tonight’s game. For starters, he got the nod over Justin Layne in the Steelers’ dime packages. That may be as much a negative on Layne as it is confidence in Pierre. But Pierre rewarded them with strong play overall, including a breakup deep down the right sideline intended for Rashard Higgins. Layne got burned on a deep pass complete to Higgins in Week 17.

James Conner: The run game wasn’t its typical awful self, though the lopsided score forced the Steelers to abandon things by halftime. Conner picked up a key 4th down conversion and ran off Matt Feiler’s hip for the team’s first touchdown of the night.

JuJu Smith-Schuster: If this is his last game as a Pittsburgh Steeler, it was a good one to go out one. Smith-Schuster set a season high in receptions and yards Sunday night, finding soft spots against the Browns’ passive, zone defense and finding the end zone on an over route to defeat man coverage. Pittsburgh finally used him as something more than an utter checkdown option tonight.

He finished the game with 13 receptions for 157 yards.

Ben Roethlisberger: Roethlisberger had to put the team on his shoulders – again – in the second half, throwing the ball on nearly every single play. But that was partially because of his first half miscues. The Steelers’ run game wasn’t completely useless Sunday night but they had to abandon it after falling behind by 28. Roethlisberger threw three INTs. A pass that was a touch high and clipped off Diontae Johnson’s hands (it could’ve been caught but the throw was undeniably sub-par) another pass that was tipped and picked and overall, he helped dig the Steelers into a hole they couldn’t climb out of.

Roethlisberger’s final INT made him the first Steelers’ QB to ever throw four picks in a postseason game. It was a terrible one, thrown right at the Browns’ linebacker.

Maurkice Pouncey: Pouncey was responsible for the Steelers getting off to the worst start imaginable. Call it being too hyped up for the playoffs, too focused on making his reach block, maybe a bit of both, but his high snap cost the Steelers seven points on the first snap of the game (though Conner’s/Roethlisberger’s attempt to fall on the ball was laughable). Pouncey had a 4th down snap that basically rolled to Roethlisberger’s feet too. Pouncey hasn’t had the overall snapping issue he did in 2019 and his play this year wasn’t terrible (though not great either) but it’s time for the Steelers to at least draft his replacement, even if he’s not starting for another year.

Mike Tomlin: It’s hard to blame Tomlin for bad snaps, high throws, those clear, specific, individual problems. But the last decade has been a huge disappointment for this Steelers’ team. And that falls at Tomlin’s feet. In this game, he also punted deep into Browns’ territory down massively in the first half, went for two to try and make it a 17 point game (it failed) and then kicked the extra point when going for two could’ve made it a two-score, 11 point game. He then punted on 4th and 1 down 12. Just a lot of inconsistent decision-making.

Run Defense: Additions of Cam Heyward and TJ Watt didn’t do much to help this run defense. Nick Chubb busted off big run after big run while Kareem Hunt ran through Robert Spillane and several other Steelers’ defenders into the end zone. After running for 192 last week, the Browns ran for well over 100 yards on them again.

Cam Heyward: Heyward was my X Factor of this game, squaring off against third string left guard Michael Dunn. I’ll have to investigate how the Browns helped Dunn but Heyward was quiet on the stat sheet. Just one tackle and one pass deflection. He needed to have the game of his life. Not even close.

Defending Empty: Even knowing the four offensive turnovers in the first half, the Steelers’ defense struggled. Almost a carbon copy of the 2017 loss to Jacksonville. And as we did a video breakdown on earlier in the week, Pittsburgh didn’t have an answer versus empty. Cleveland didn’t use it a lot in this game but in plenty of crucial situations and a lot more towards the end of the game. When they needed yards, they went with heavy personnel, spread the field, and picked on LBs covering WRs (usually Jarvis Landry) in the slot. I’ll have the stats for you a few days from now but they weren’t pretty.